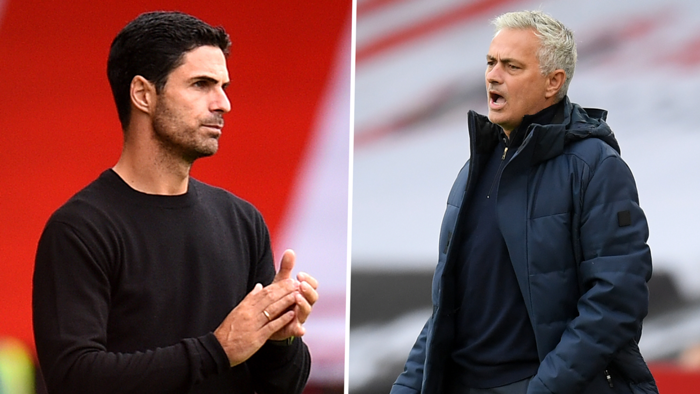 Mikel Arteta says Jose Mourinho is still a world-class manager as he prepares to face the Portuguese coach in his first north London derby on Sunday.

Spurs failed to muster a single shot on target during the dour stalemate and there are some who are beginning to question the direction the club is heading in under Mourinho.

But Arteta, who briefly trained under the 57-year-old while he was a player at Barcelona B during the early stages of his career, is adamant that the two-time Champions League winner is still one of the best in the business.

“Absolutely,” he said, when asked if Mourinho was still a world-class coach.

“They have had some up and downs, but overall you can clearly see what he wants to bring to the club.

“He manages the energy, the momentum and established a really strong culture in a strong football club that does it. And as well, he makes sure that he wins, and he has won in every single club that he has been.

“Obviously the situation, the timing when he arrived, is different than starting a new project right from the summer, but I am sure he will be successful.

“He has always been. He always finds the right way to do it andit will take him a bit of time, but I am sure he will do it.”

“I think clean sheets are obviously a big thing that he wants to do, but his teams - don’t forget - always score a lot of goals. They have been really successful and they have been able to win titles because of that.

“I think in a long period they Tottenham have had a lot of injuries. So he hasn’t had the chance to be consistent as well with his team and that’s a big disadvantage that they have.

“I know he has done it. I know people have worked with him and he always finds a way to be successful and I am sure he will do it again.”

Sunday’s north London derby will be refereed by Michael Oliver, who was the VAR official for Tottenham’s draw at Bournemouth on Thursday when Spurs felt they should have had an early penalty for a push on Harry Kane.

Match official Paul Tierneydidn’t award the spot kick and Oliver stuck with the on-field decision having reviewed replays of the incident. The Premier League admitted after the game, however, that a penalty should have been given.

The incident came just a few days after Oliver - again on VAR duty - had ruled out a goal scored by Kane for handball during Tottenham’s 3-1 defeat at Sheffield United.

Mourinho was highly critical of Oliver during his post-match interviews at Bournemouth, “like against Sheffield United, the man of the match was not one of the players,” he said.

It’s led to some suggestions that Oliver should be taken off duty for Sunday’s game, but Arteta insists he has no concerns overhim taking charge of the derby.

“I never have any concern about the decision of the referee,” said Arsenal’s head coach. “Nowadays, everything's so professional, dedicated and they're under so much pressure and criticism.

“I know they try their best with the decisions that they have to make. They're getting more and more complicated because of the speed of the game and how quickly they have to react, and the pressure they have with the new VAR system as well.

“We're here to support them, we need them, they're a big part of that. Now we complain that we don't have the fans and we realise how important they are, maybe one day we won't have referees and we're going to say, 'Wow, they were crucial for this game to work'.