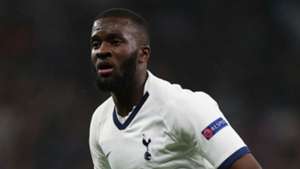 Jose Mourinho was scathing in his assessment of Tanguy Ndombele's display in the 1-1 draw against Burnley on Saturday and warned the Tottenham midfielder he is running out of patience.

Club-record signing Ndombele started alongside Oliver Skipp in midfield at Turf Moor, and Spurs were severely lacking in ingenuity as they went into half-time behind to Chris Wood's strike.

A tactical shift away from a three-man defence for the second half saw Skipp and Ndombele make way for Lucas Moura and Giovani Lo Celso, the latter playing a key role in the equaliser.

Lo Celso drove forward in midfield and fed Erik Lamela, who was sent to ground by Ben Mee, and Dele Alli converted the resulting spot-kick for his 50th Premier League goal.

Mourinho has been tough on Ndombele during the France international's first season in England and effectively blamed him for their sluggish start against Burnley.

"I think the quality and dynamic of Lucas and Lo Celso made a difference, and I don't - I want to say but I cannot say," Mourinho told Sky Sports after Spurs' winless run extended to five games.

Pushed for more, he said: "I think fatigue is fatigue, Lucas had it and Lo Celso had it and [Steven] Bergwijn had it and Dele Alli had it and they gave what you saw. I don't ask much more than that.

"I was expecting players not tired to give more to the team and I think somebody [Ndombele] has to realise this is the Premier League.

"I think this is probably a new experience, the first time he comes to Burnley, and I hope next season he can be fantastic, because until now isn't enough.

"I hope that he uses every minute on the pitch and every minute knowing what the Premier League is to improve. Many fantastic players in their first season in a new country, for different reasons, they struggle. There are many, many examples of that.

"He's a player with great talent and has to know he has to do much better and know I cannot keep giving him opportunities to play because the team is much more important than the players, and the players must be on the pitch as a consequence of their performance. This is performance-level football."