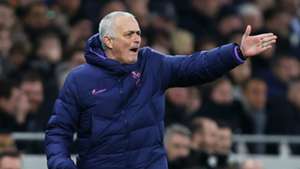 The club-record signing started alongside 19-year-old Oliver Skipp as the London side came fell behind in the first-half at Turf Moor.

Both players were withdrawn at half-time, as Giovani Lo Celso and Lucas Moura were introduced, and Spurs levelled the score through a Dele Alli penalty just five minutes after the restart.

The London side's performance left Mourinho frustrated, however, and he called out Ndombele, stating that the 23-year-old "has to realise this is the Premier League".

He continued: "I think this is probably a new experience, the first time he comes to Burnley, and I hope next season he can be fantastic, because until now isn't enough."

Mourinho added to BBC Sport: "From Tanguy, of course, I think with the quality he has he must have more responsibility in doing what the team needs from a midfield player with his quality."

But Murphy believes the coach was wrong to single out one player in particular for his side's underwhelming first 45 minutes, saying more players deserved to be criticised.

"It was unjustified, to be honest," Murphy said on Match of the Day.

"There were at least six of them, seven of them, that were not quite at the races in the first half. We are also talking about Burnley's quality and tenacity and willingness to get at them and stop them playing.

"Ndombele was no worse than half a dozen others. So I think it is harsh to use him as a scapegoat. All in all, you cannot blame Ndombele for the first half. Burnley were quality and Tottenham were tactically wrong."

Spurs are now five games without a win in all competitions, having crashed out of the FA Cup with a penalty shootout defeat to Norwich in midweek.

They are in action again on Tuesday when they face RB Leipzig in the return fixture of their Champions League last-16 tie, having lost 1-0 at home in the first leg.