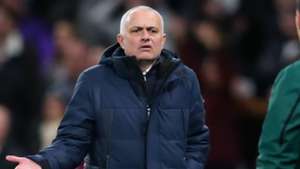 Jose Mourinho questioned people sitting in "privileged positions" at Tottenham Hotspur Stadium and whether they are "real" Spurs fans after Eric Dier climbed into the stands to confront supporters.

Tottenham crashed out of the FA Cup in the fifth round following Wednesday's penalty shoot-out loss to Norwich City after a 1-1 draw at the end of extra time.

The match was overshadowed by an incident involving Tottenham's England international Dier, who jumped over advertising hoardings and rushed into the stands as the stadium emptied in London.

Tottenham head coach Mourinho said the incident involved Dier's brother before the Portuguese discussed fans sitting in the corporate areas of the stadium.

"The people that are in these privileged positions by the tunnel," Mourinho told reporters post-match, while adding he is unaware of racism allegations.

"Of course some are Tottenham fans but I think a lot of corporate, a lot of invitation, a lot of people with special status and probably it's the place of the stadium where I sometimes have doubts over if they are the real Tottenham fans because these [real fans] are the ones who support the boys until the last.

"This person insulted Eric, this family was there. The young brother was not happy with the situation and then Eric, I repeat did what we professionals cannot do, but did something that probably we would do."

The loss is another blow for injury-ravaged Tottenham, who have gone four matches without a win in all competitions.

Spurs must dust themselves off quickly as they travel to Burnley in the Premier League on Saturday before making the trip to RB Leipzig for the return leg of their Champions League last-16 tie only three days later.

With Tottenham - seventh in the Premier League and five points off fourth place - struggling for fitness and trying to compete in the Champions League, Mourinho said he can only prioritise one competition.

"In this moment I have to think about what's next and I have to speak to my club because I think some of these boys to have a chance to fight Tuesday for a Champions League position they just can't play on Saturday," Mourinho added.

"Particularly in forward positions, behind we've got options but not going forward. I think we don't deserve the result but that's football.

"As you can expect it was a difficult game, as I could expect some of my players were really, really in trouble and they made an incredible effort to try.

"Harry Winks was completely dead. I think he's started 11 to 12 games in a row, we had many, many players in trouble.