Mourinho points out coronavirus 'contradictions' after Tottenham game called off

Mourinho points out coronavirus 'contradictions' after Tottenham game called off 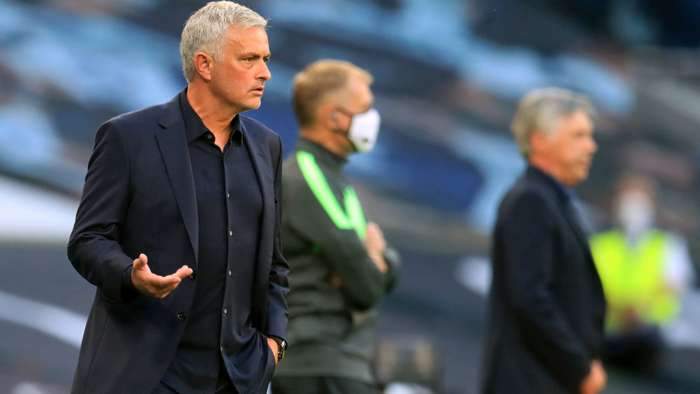 Jose Mourinho will name a strong Tottenham team at Shkendija on Thursday, rather than calling on the players who were set to face Leyton Orient.

The compact nature of the new season has provided Spurs with a frantic fixture list, with three matches scheduled for this week.

However, Tuesday's CarabaoCup meeting with Orient was called off after the League Two club announced a number of positive coronavirus tests in their first team.

Mourinho had previously professed his frustration at the Carabao Cup schedule and also bemoaned a "world of contradictions" after West Ham played Hull City despite their own Covid-19 cases.

"In relation to the EFL Cup, my initial feeling was when people don't respect us, why should we respect the competition?" he said.

"In relation to testing and Covidand all this situation, there are so many contradictions that I don't want to go into, this world of contradictions.

That development gave Tottenham an unexpected night off on Tuesday ahead of the trip to North Macedonia for their Europa League third qualifying round match.

Mourinho will not simply send out the same side that had prepared for Orient, however, explaining the gap between Sunday's win at Southampton and this fixture was far more manageable for his big names.

Indeed, having required a late turnaround against nine men to beat Lokomotiv Plovdiv in the previous round, the coach is wary of taking Shkendija lightly.

"The team that was supposed to play last night is different than the team that plays tomorrow," Mourinho said.

"It is a normal situation for a football player of this level to play on Sunday and have three days rest and play again Thursday. That's normal.

"It's not normal to play Sunday and then Tuesday, so obviously the teams are going to be different. The main reason is the health and conditions to perform.

"Is the Europa League a competition that we want very, very much to go to the group phase? Yes, it is.

"I think from my experience, and even you without experience in this chair, as a journalist, you can perfectly feel it's much more difficult this knockout than the group phase of four teams and six matches.

"The six matches give us a little space for a mistake - for example, at Manchester United, we lost two matches in the group phase, we won four and we progressed - so we cannot take many risks with these matches.