Mourinho not expecting Spurs to punish Dier after fan altercation 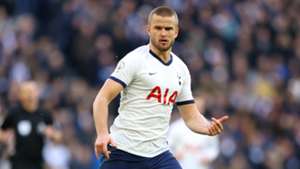 Jose Mourinho has expressed his belief that Tottenham will decide against punishing Eric Dier after his altercation with a fan, insisting he is "with the player".

Dier looks likely to face action from the FA for attempting to confront a supporter who was believed to have been involved in a row with his brother following Spurs FA Cup defeat at the hands of Norwich on Tuesday.

The England international climbed into the Tottenham Hotspur Stadium stands after the penalty shootout loss and clambered over rows of seats to get at the man in question before being restrained by stewards.

Mourinho has since stated that "almost nothing happened" and he still plans to include Dier in his squad for a meeting with Burnley at Turf Moor on Saturday evening.

The Portuguese tactician was asked to address the incident once again at a press conference ahead of that Premier League clash, and played down any notion of Dier being subjected to any disciplinary measures by Tottenham.

"I don't know the answer [as to whether he will be disciplined]," Mourinho said. "The only thing I can say is that, if the club does, it's not because I want it.

Dier has been a regular in Tottenham's starting line-up in the heart of the defence in recent weeks, having managed to persuade Mourinho that his talents would be better suited to a role at the back than in midfield.

"[When I arrived, in Dier] I found a player that was not playing. I found a sad player, without confidence," the Spurs head coach added. "Then I was trying to give him that confidence back. I played him immediately, and in a position I thought was his natural position (central midfield).

"[But] we needed a little bit more creation and dynamic in midfield, because we wanted to give the team an offensive character. And then, when we lost the attacking players, I thought more when you don't have the goalscorers you need more players that have a little bit more creation, so we went a bit more in the direction of players like [Giovani] Lo Celso, even playing in a double pivot.

"Then I spoke with him (Dier) a few times. He was always giving me the idea that his best feeling would be playing as a centre-back, and my answer at that time was I think this is something to maybe start him in next pre-season.

"By different circumstances, I decided to play him against Wolves in a back-three, where I thought he would be less exposed and, with the ball, a midfield player. He played so, so well. Then I decided 'okay, the feeling is so good, let's go with a back-four when it is more difficult for a centre-back'. He did so, so good again. So now we have the feeling that maybe it's his best position.

"And again, more important than what I or my assistants feels, or data says, is what the player feels. And he loves to play there. You can see his attitude on the pitch; leadership, confidence. So maybe there is a good solution for him. And in a world where there are not so many centre-backs, in this moment, at a high level, he is a good solution for us."

After facing Burnley, Tottenham will look ahead to a Champions League round of 16 second-leg clash away at RB Leipzig on Tuesday, where they will be aiming to overturn a 1-0 aggregate deficit.

Mourinho's men are due back in Premier League action five days later, with a vital home fixture against top-four rivals Manchester United on the cards.