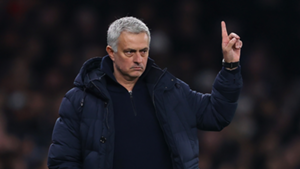 Jose Mourinho believes the atmosphere during Tottenham's FA Cup defeat to Norwich City was "fantastic" and "an example of what football should be" despite the match being marred by an incident involving Eric Dier and a fan.

Spurs lost 3-2 on penalties following a 1-1 draw after extra-time on Wednesday, with Dier one of the two who successfully converted his spot-kick.

But after the match, photos and videos began circulating on social media showing Dier marching into the stands at full-time to confront a supporter, with Mourinho later confirming the midfielder had gone into the crowd to deal with an incident involving his brother.

One of the videos showed the England international being restrained by a group of people made up of fans and stewards, with the situation appearing to be diffused before an altercation occurred.

And Mourinho ignored the incident when asked about the crowd atmosphere on Wednesday, insisting he "didn't see any negativity".

"I think, independent of their happiness at the result, they [Norwich fans] came to enjoy and it was great. Great respect from the Tottenham fans to them. I don't know one single incident that happened.

"Tottenham fans were supporting the team from minute one until the last penalty we missed. Fantastic support from our fans. I didn't see any negativity.

"If somebody had a little incident in the end, I prefer to focus on the beautiful things in the game and to praise fans from both clubs for such a fantastic support.

"Two or three yellow cards by normal actions. Great relations between the two benches. We have a fantastic relationship between the staffs. Good referees and the only thing apart from that incident I didn't like was that in the penalty shoot-out, the assistant on the line and the VAR they were sleeping.

Mourinho also confirmed on Friday he sees no reason not to play Dier in Saturday's Premier League meeting with Burnley.