Mourinho admits he is scared of Aurier's 'sh*t' defending, trolls Sanchez over Europa final defeat in Tottenham's Amazon documentary All or Nothing

Mourinho admits he is scared of Aurier's 'sh*t' defending, trolls Sanchez over Europa final defeat in Tottenham's Amazon documentary All or Nothing 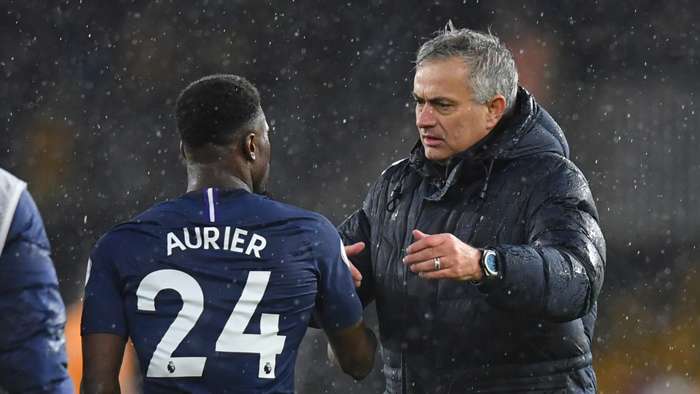 Tottenham boss Jose Mourinho told right-back Serge Aurier he was scared of his 'sh*t' defending prior to the Ivory Coast international scoring the go-ahead goal in an incredible Champions League comeback.

In what was only his second game in charge of the North London clubfollowing the sacking of Mauricio Pochettino a week earlier, Mourinho delivered a message about marking at set pieces before directing criticism toward Aurier in front of the entire team.

"Serge, you are a marker. You speak good English?" Mourinho asked to which Aurier nodded with confirmation.

Tottenham ended up down 2-0in the match as half-time approached before Dele Alli pulled a goal back on the stroke of half-time.

Harry Kane forced the equaliser five minutes after the break before Aurier popped up with the goal to put Spurs ahead in an eventual 4-2 victory.

During the documentary, Mourinho is also seen trolling Davinson Sanchez over the centre-back's defeat while playing for Ajax in the 2017 Europa League final.

Mourinho was managing the winners of the trophy at the time- Manchester United - and he tells Sanchez that he and his Ajax team-mates were 'sh*tting themselves'.

"I won the game minute one,"Mourinhosaid to Sanchezwith a smirk.

Mourinho is seen giving tough love to other Spurs players during the production, including Dele Alli, who he accused of being alazy trainer before admitting Sir Alex Ferguson wanted him to sign the English midfielder at Manchester United.

In a speech to Harry Kane, Mourinho promises to use his own box-office appeal to lift the profile of the club's star striker, who admits he wants to be like Lionel Messi and Cristiano Ronaldo.

"I think we have to build your status in that direction of becoming like a movie star," Mourinho said to Kane in their first meeting after he was appointed coach.

Kane replied: "That's my aim. When you are at a club like Tottenham, of course we have done well and I have done well but I want to be like Ronaldo, like Messi."