Mourinho: Tottenham are 'too nice' but defeat to Wolves was 'totally unfair' 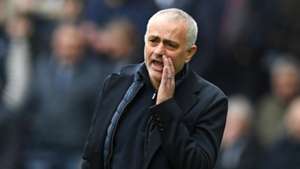 Jose Mourinho felt Tottenham were "too nice" as they recorded a third consecutive defeat on Sunday, though he said their 3-2 reverse to Wolves was "totally unfair".

Spurs followed up losses to Chelsea and RB Leipzig with another setback at home on Sunday, denting their hopes of securing a Champions League spot.

They twice led through Steven Bergwijn and Serge Aurier, but Matt Doherty, Diogo Jota and Raul Jimenez all struck for Wolves, who moved above Spurs into sixth place in the Premier League.

Tottenham did not manage a shot on target in the second half but Mourinho felt the outcome was not an accurate reflection of the match.

"I don't think it was a fair result," he told reporters. "Both teams were looking to win with different styles. They are so powerful on the counter-attack.

"We tried different solutions. It worked in a way because we scored two goals. I think it's unfair, the result, totally unfair."

He added to BBC Sport : "The players didn't deserve the defeat. We were punished by, I would say, mentality mistakes. You have to be ruthless against teams like Wolves that play fantastically well on the counter-attack.

"We deserve much more than these results. The front three combined well, they did what they can. They did the plan that we worked on in the week.

"It was a great game. My team didn't deserve to lose at all. It is difficult to find a reason to lose the game, apart from a couple of individual mistakes. The team was good, they were in control.

"In the beginning of the game we were superb, Wolves were really in trouble I would say.

"In the last period of the game they know what we cannot do, and then they just compact with everybody in the box and that is obviously the most difficult thing for us in this moment.

"It's really, really frustrating and I'm sad obviously, but I am more sad for the players."

Mourinho, though, did acknowledge an area where Spurs could improve.

"We don't have that aggression," he said. "We are too good, too nice. That was maybe the only difference between the teams."

Opposite number Nuno Espirito Santo insisted the victory took on no extra significance because it came against Mourinho, who managed him at Porto.

He said beating Mourinho's side was "nothing special" , though he stated his admiration for his former boss.