Mount: I was too desperate to end my Chelsea goal drought 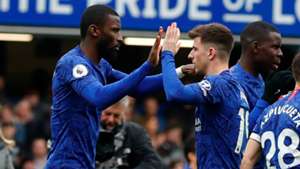 Mason Mount says that he was too desperate to end his 18-game goal drought following his bright display in Chelsea's 4-0 win over Everton.

The Blues produced one of their best performances of the season, with Mount's shot beating Jordan Pickford to open the scoring on Sunday afternoon.

The recent barren spell was the longest run without a goal in his senior career, having bagged 14 goals at Vitesse and 11 at Derby County in his first two professional seasons.

Mount will still want to reach double figures in his first Premier League season after his sixth strike of the campaign but admits he has had to overcome the psychological side of goalscoring to end the drought.

"I have found recently that I have been trying too hard to score and kind of snatching at shots and trying to take shot when off-balance and stuff," Mount said at Stamford Bridge. "When you're so focused on scoring and thinking 'I need to score', you do that.

"You start snatching at it. You don't take your time and focus on your technique enough. Today, I kind of had looked at my game and where I've been going wrong recently and to aim, stay calm and not to try to look for it as much as I have been.

"It just happened. I took a touch and turned and finished. It wasn't me thinking about it too much. I think I've been overthinking it. It hasn't been coming my way and I have been snatching at it.

"Today, it was the total opposite. It wasn't in my head, I just focused on the performance and it came. I do look at games. My dad is very into football and watching my game and where I can improve. He helps me a lot.

"He's here for every game and after he'll tell me what I did best and what I didn't do well and where I need to improve. The last few games has been finishing and end product.

"I think I took a shot against Bournemouth from an impossible angle where I was just trying to score a worldy when it wasn't on. We spoke about that. More just me personally looking at my game, speaking to my dad as well.

"I think about games like the Bayern game where I snatched a chance with my left foot where it hasn't been on. It's something where you don't have to try so much. It just comes at the right time and it did today.

"You listen to every bit of advice coming your way and learn from it. It's good to have my dad there focused on me, watching what I need to do better. It helps me so much coming off the pitch speaking to him in the car. We have done that since I was a little kid and some things never change."

Mount has leaned upon his father's expertise as a coach at non-league level to hone his skills in the fiercely competitive world of football since he was a boy. Still today, the England international takes feedback from the coach that also helped train Southampton's James Ward-Prowse on technique over the summer.

Upon scoring, Mount leapt into the air in relief and upon landing did the dance he terms 'the Frankenstein'. It came after an interview with the musician and YouTuber Chunkz, who had convinced him to try a new celebration.

"It was a new one, yeah," he added. "I had an interview with Chunkz. He messaged me, I'm going to FaceTime him but it is his kind of dance move. We had an interview and he said 'next time you score a goal, can you do it?' So I always had it in my head and I pulled it out today."

Chelsea can now say they have back-to-back home wins for the first time since November after being under threat of dropping out of the top four with pressure from a host of other teams.

Mount is now challenging his side to string together enough wins to ensure they play in the Champions League again next season.

"We've been up and down through the whole season," he concluded.

"It hasn't been a very consistent season where we have been scoring a lot of goals and keeping clean sheets. It hasn't been like that so we have had to focus on what we do really well and not change."