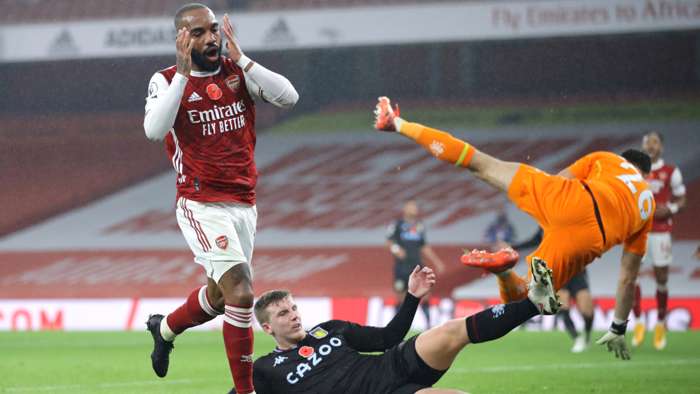 Arsenal’s failure to hit the back of the net in Sunday's defeat against Aston Villa means they have now scored their fewest amount of goals at this stage of the season for 22 years.

It means Mikel Arteta’s side have now scored just nine goals in eight Premier League games this season; their fewest at this stage of a league campaign since 1998-99. It was also their worst home league defeat since a 3-0 loss against Manchester City in December 2019.

Their struggles against Villa were perhaps symbolised by the performance of Pierre-Emerick Aubameyang, who played 90 minutes in a Premier League home game without attempting a shot for the first time as a member of Arsenal.

"Well first congratulations to Aston Villa for the victory and the way they played, I thought they were strong and obviously from our side I take total responsibility because it's not acceptable the performance we put in from the beginning,” he told BBC Radio 5 Live.

"I'll keep what I said to my players in the dressing room private, my role is to get the team performing at the highest level every three days and today we haven't done that and since I got appointed it's the first time I haven't seen that team on the pitch.

"This is football and when you are not at the races and not at your best teams destroy you in the Premier League. It's a really bad combination if you don't win the duels, you are late and they are more focused, they are more determined for every ball. If you don't defend your box well enough and you have chances but you don't put them away.

"No we are not creating enough chances but the ones we did create were clear enough to score at least one goal but if you look at the numbers from the last few games it's not enough.”

A miserable evening for Arsenal was compounded by an injury to Thomas Partey, who was forced off at half-time with a suspected thigh injury.

He is the latest player to suffer a muscle injury in recent weeks, with the hectic domestic and European schedule taking its toll.

That has revived the debate about the use of five substitutes, which was allowed during the summer restart but was rescinded following a vote by Premier League clubs at the start of the season.

Arteta reiterated his support for the five substitutes rule, but accepts it is out of his hands.