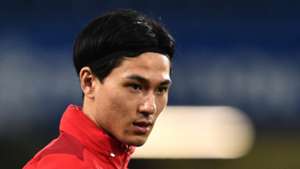 Takumi Minamino admits he is still learning how Liverpool operate since his January move from Red Bull Salzburg, but he wants to make more of his "limited chances" on the pitch.

The Japan international has been eased into life at Anfield, playing 90 minutes for the first time in the 2-0 FA Cup defeat at Chelsea this week.

Minamino is yet to find the net for Liverpool, but says he is getting to grips with Jurgen Klopp's instructions and is eager to repay his manager's faith in him.

"In the last three months there have been areas which I'm quite happy about," Minamino told Liverpool's official website.

"But personally, I would love to contribute more goals and assists - I'm feeling very hungry about that.

"I don't really know how much I still need to learn. But day by day, I'm feeling that I understand his [Klopp's] philosophies and I'm getting better.

"I have been in this club for three months and I haven't played many games and my playing time is not that much - but this is not a good excuse.

"I think I'm still [learning] to fully understand the team, but I still hate to wait. In order to make an instant impact and make a contribution to the team, I'm doing my best every day.

"I only have limited chances but when the manager needs me, I have to show the results of the manager's expectations."

Still looking for his first goal for Liverpool, Minamino will have been disappointed to see the FA Cup - which has brought all three of his starts at the club - slip away with defeat at Stamford Bridge.

With their third defeat in four games in all competitions, Liverpool have slipped up in recent weeks, though capturing the Premier League title remains little more than a formality.

"It's really important to focus 100 per cent on the remaining Champions League and Premier League titles," Minamino added.

"Of course, we failed to win some titles and we're obviously very disappointed but we have to use that feeling.

"We only can get over that disappointment of this loss by winning the next matches. Luckily we've got a very tight schedule and the next match is coming soon at the weekend.

"We stop thinking about this loss by just concentrating on winning this next match and training harder.

"We are never negative; we all think about winning the next match.

"The atmosphere in the dressing room is really positive - we keep this positivity in training every day."