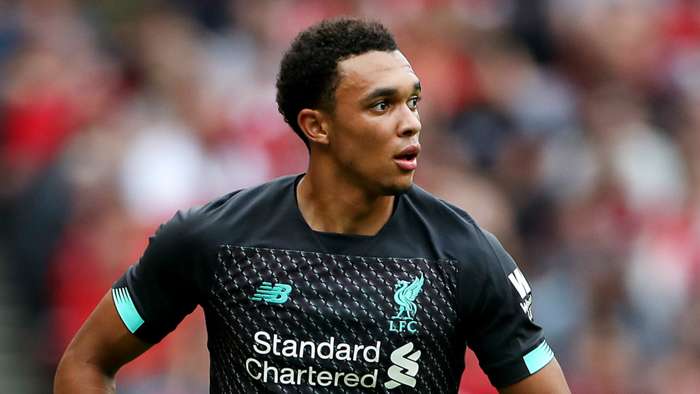 A role in midfield is the more “natural position” for Trent Alexander-Arnold, claims Emile Heskey, with the Liverpool right-back expected to change position at some stage.

TheMerseyside native has earned a regular role for the Reds and England while operating in defence. At 21 years of age he is already a key man for club and country and a player with the potential to become one of the finest on the planet.

Alexander-Arnold has offered no indication that he is looking for a role change any time soon, and has said he aims tobecome the Premier League’s best right-back of all time.

Many are, however, backing thefull-back who has contributed 30 assists to the Liverpool cause over the course of the last 12 seasons to take on a more prominent playmaking post.

Former Reds striker Heskey toldSky Sports of theAnfield academy graduate: "If you were to ask him, he would be more than happy to play in midfield because that is, I would say, his natural position.

"He gets more space in the wide areas and then you see the passing range that he has, but that passing range has obviously been built up over the years playing in central midfield.

"His decision-making probably comes from having less time when he was in central midfield. He's had to be aware of what's going on around him."

Ex-Liverpool midfielder Graeme Souness is another who feels that Alexander-Arnold could thrive in the middle of the park, but he would be in no rush to make that tactical tweak.

The Scot said: "It's a different game in there. You are dodging bullets and elbows are up. If he's full-back, he knows nothing is coming to his right when he receives the ball.

"Full-back is a very different position and you get plenty of time there to have your first touch, get it out of your feet and get your head up, but he's as good as anyone when he gets a chance to deliver."

Souness added: "I think the boy could play anywhere in midfield. He started out as a central midfield player and then saw an opening at right-back.

"You would be reluctant to take him away from where he is because a large part of Liverpool's attacking play comes from him and Andrew Robertson. They have high energy levels, and when they get into the last third, they can deliver.

"Looking at it now, you've just won the league, you are the current European and world champions, so if it ain't broken, why try to fix it?

"But the modern defender today, at the top clubs, has to be able to take the ball and play and deliver in the final third, so why not?"