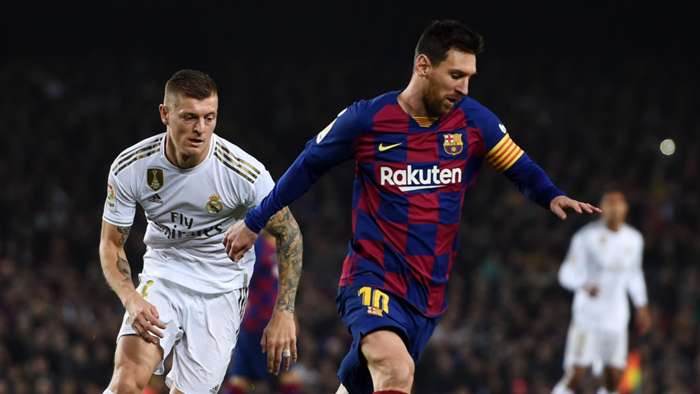 Lionel Messi would be highly unlikely to swap Barcelona for Real Madrid and would need to show "cojones" to remain if Spain if he departs Camp Nou, says Toni Kroos.

The future of Argentina superstar Messi remains shrouded in doubt after he made the club aware of his intention to leave following Barca's humiliating 8-2 defeat to Bayern Munich in the Champions League quarter-finals.

Messi did not show up for pre-season training this week, nor did he appear for coronavirus testing on Sunday, as he believes a clause in his contract is now active making him a free agent – something Barca dispute.

A reunion with Pep Guardiola at Manchester City is seen as the likeliest outcome should Messi seal a spectacular exit, with Barcelona presidential hopefulVictor Font expressing his belief that the Premier League club are the 'top candidate' to sign the 33-year-old.

Kroos also sees that as a possibility, but the Blancos star cannot imagine Messi becoming a Madrid team-mate any time soon.

"I do not think he will come to Real Madrid, if I have to rule it out categorically," he said on the Einfach malLuppen podcast with his brother Felix.

"To stay in Spain: You need cojones for that. I think hardly anyone in the football world can imagine Barcelona without Messi."

Kroos added "that it could most likely be Pep and City" for Messi, while admitting Barca losing a player of his calibre would not be a bad thing for La Liga champions Madrid.

"If one of those players no longer plays in the rival team, one can imagine that we do not consider it as something necessarily bad," Kroos, whose Madrid side overhauled Barca to win the title last season, said.

"Messi away from Barcelona means that Barcelona lacks a total weapon."

Kroos is preparing for a Nations League double-header against Spain and Switzerland and revealed he is no longer told by Germany head coach Joachim Low when he has been selected for international duty, only if he is being rested.