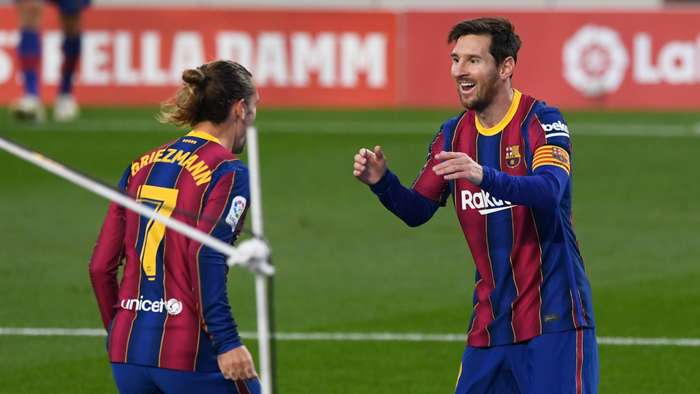 Barcelona coach Ronald Koeman moved to dispel any controversy over benching Lionel Messi on Saturday, after the Argentine came on to assure his side's Liga victory over Betis.

By half-time, however, Koeman already required his presence, throwing him into the action with Barca deadlocked at 1-1 against the Seville side.

Messimade an immediate impact, teeing Antoine Griezmann up with a wonderful dummy before scoring twice himself, including his first goal from open play in the entirety of the 2020-21 season to date.

Teenage sensation Pedri rounded off Barca's 5-2 win in stoppage time, but after the game all eyes were on Koeman and his risky decision to leave Messi out of his starting line-up.

"We talked to Leo, who came out of the Dynamo Kyiv game with a niggle and he was not fit to play from the start," the Dutchman explained to reporters after the final whistle.

"He was on the bench in case we needed him. If he was physically OK, he would have played from the start."

Barca's recent woeful run of form saw the Catalans drop as low as 14th by the time they took the field on Saturday, heightening the pressure on Koeman after just a handful of games in the post.

And though they needed Messi's magical intervention to take three points, the coach was pleased to see his side creating chances, while singling out Griezmann's contribution as the Frenchman bounced back after missing a first-half penalty.

"It is a big win for how much we needed the points and I am happy with our attacking play," he added.

"We created a lot of danger, with a lot of chances. The draw at the break was not fair.

"We were better, missed a penalty and had more chances. We deserved to score in the second half.

"I hope Griezmann keeps working as he has done so far. You have to be there in order to miss.