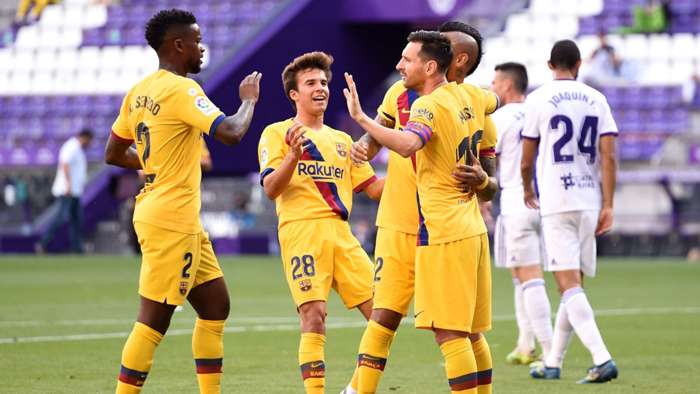 Lionel Messi became the first player in La Liga history to score 20 and assist 20 goals or more in the same season when he teed up Arturo Vidal for Barcelona’s openeragainst Real Valladolid on Saturday.

He is the first player to reach 20 assists in La Liga since former team-mate Xavi in 2008-09, with no player combining that feat with 20 or more goals in the Spanish top flight until now.

The 33-year-old is just the second player to achieve that feat in Europe’s top five leagues this century, after Thierry Henry scored 24 goals and contributed 20 assists for Arsenal during the 2002-03 Premier League season.

Messi currently stands on 22 goals at the top of the goalscoring charts, four clear of his nearest challenger Karim Benzema, highlighting his continued importance to the side despite his advancing years.

It is also yet another reminder to the club’s board of his immense talents, with speculation about his Barca future continuing to swirl around Camp Nou.

Earlier this month, a Cadena Ser report claimed Messi was ready to call time on his illustrious Barca career when his contract expires next summer.

Goal has learned Messi does not want to leave Barcelona but has grown increasingly concerned with the leadership of the club off the field as well as the team’s struggles for consistency on it, prompting him to bring contract talks to a halt.

If the six-time Ballon d’Or winner were to hold out on agreeing fresh terms until the turn of the year, then he would be free to discuss pre-contract arrangements with any suitors.

It has been suggested that the contract impasse could potentially precipitate a premature end to Josep Maria Bartomeu's presidency, with club elections set to take place in June 2021.