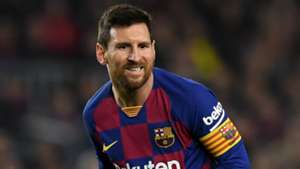 Lionel Messi has opened up on how he managed to elevate his free-kick success rate this season following his impressive haul across the first half of the 2019-20 campaign.

Messi's typical proficiency in front of goal has often been chalked up to a unique natural talent, but the Argentine has now revealed additional insight into his approach.

Goalkeepers may have had enough of Messi putting the ball beyond them, but getting the better of the men in the gloves is an eternal challenge for the 32-year-old.

"Recently I have been looking into it, and especially in free-kicks, to see if they move before, if they make a small movement, if not, how they react, how they place the wall," Messi said.

"It's true that I am now studying this a bit more. But everything is work and training, I have been getting better with training."

In an interview with La Liga to mark the league's 90th anniversary, Messi said the 432 goals that make him the league's all-time record scorer fill him with pride.

"To be the top historical scorer [in] La Liga, with what the Spanish league means, is special," he said.

"To be honest I think that this is one of the best records I have.

"Every time I go out on the pitch, I think less about the goal and more about the game."

The six-time Ballon d'Or winner recalled his early years at Barcelona when his strike rate was nothing like it has become.

Messi has become a near goal-a-game menace to defences, but it was not always the case.

"The first few years, it was difficult for me to score goals; either I was missing or I didn't have any luck," he said.

He remembered a pep talk from Samuel Eto'o, who predicted the floodgates would eventually open - "because you have a lot of chances and you don't finish them".

Messi added: "Then one day it clicked, they went in."