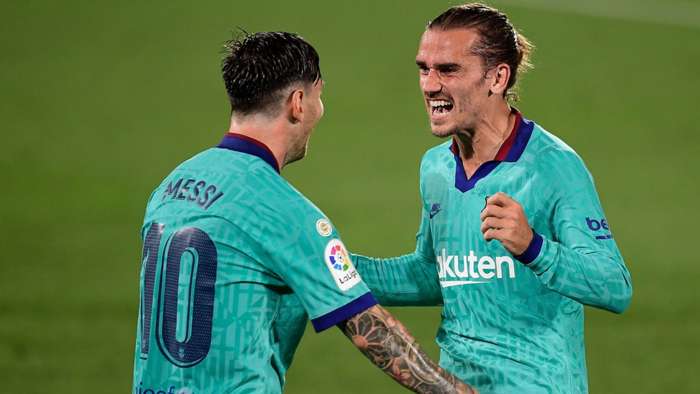 Lionel Messi wrote another page in the record books when he set up Antoine Griezmann for Barcelona’s third goal against Villarreal for his 19th La Liga assist for the season - the Argentine’s best ever tally in the Spanish top-flight.

The 33-year-old had already set up Luis Suarez midway through the first half at El Madrigal, becoming the first player to reach 18 assists for the season since Messi himself did so in 2014-15 and prior to that in 2010-11.

He went one better shortly before the break, with his neat back-heel teeing up Griezmann who stroked home his ninth La Liga goal of the campaign. Messi has now up set up three of those nine goals, more than any other team-mate.

It was perhaps a timely reminder to the Barcelona hierarchy of Messi’s continued importance to Barca despite his advancing years.

Not only is he top of the assists chart, he is also La Liga’s top scorer with 22 goals - five goals clear of nearest challenger Karim Benzema. He thought he had taken his tally to 23 on Sunday eveningbut his close range strike was ruled out following a VAR referral.

It was also a memorable evening for Suarez, whose 194th goal for Barca moved him level with Laszlo Kubala on the club’s all-time scoring charts, with only Cesar Rodríguez and Messi ahead of the Uruguayan.

Teenageprospect Ansu Fati made sure of the win with a fourth goal late on to narrow Real Madrid’s lead at the top of the table back to four points, though Los Blancosremain in the driving seat for the title with four games remaining.

Messi’s latest match-winning antics comes after a week of frenzied speculation over his future at Camp Nou , with the striker yet to respond to Cadena SER's claim that he could leave Camp Nou when his contract expires next summer

As previously confirmed by Goal , Messi does not want to leave Barcelona – but he is immensely frustrated with how the club is presently being run, highlighted by the cancellation of talks over a new contract.