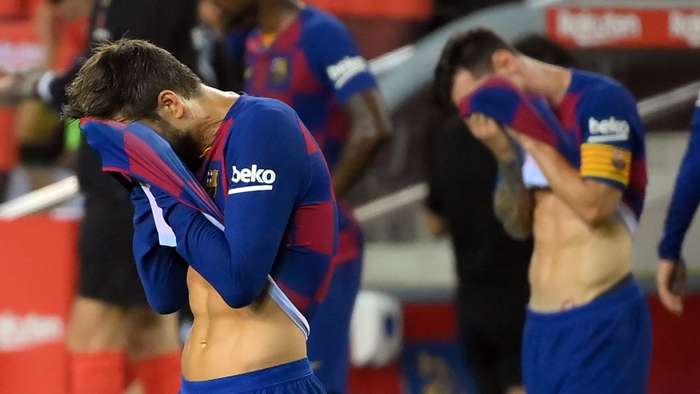 Barcelona head coach Quique Setien has admitted that star man Lionel Messi was correct in his scathing attack on recent performances and that the Catalan club will not progress in the Champions League if they continue along their current lines.

The Argentine warned that Barcelona will exit the European Cup at the last-16 stage if they fail to improve, with their tie against Napoli balanced at 1-1 following a first-leg draw in Italy.

The return match is slated for early August, and though there is still doubt that Setien will be in the dugout for that clash, the former Real Betis coach agreed that there must be a dramatic improvement if the Serie A side are to be vanquished.

Speaking on Saturday ahead of a clash with Alaves on Sunday, he said: “We need to change a lot, otherwise we will also lose against Napoli.

"Ialready said before that playing like this we won't be able to fight for the Champions League and you see, we could not even fight for the league. We need to be self-critical.

“We are all aware that there are many things to improve, we must be more consistent and more reliable.

“If we manage to play a match like the 4-1 win at Villarreal, where everything went well, it surely gives us what we need to win the Champions League.

“We must be more reliable during the 90 minutes and convince ourselves that if we give our best level, of course we can win the Champions League.”

He then addressed the question of whether he felt Messi’s words were a direct attack on his authority.

“No, not at all,” he said. “We all say things that are misinterpreted and others well, we experience it daily. I do not give it much importance. We all need a break to clean our minds. We will try to think in this regard.”

Meanwhile, the 61-year-old says he has no intention of handing in his resignation.

“The day I arrived I said that I would enjoy until the last day. I continue to enjoy despite the circumstances and I never thought that this would be easy,” he said.