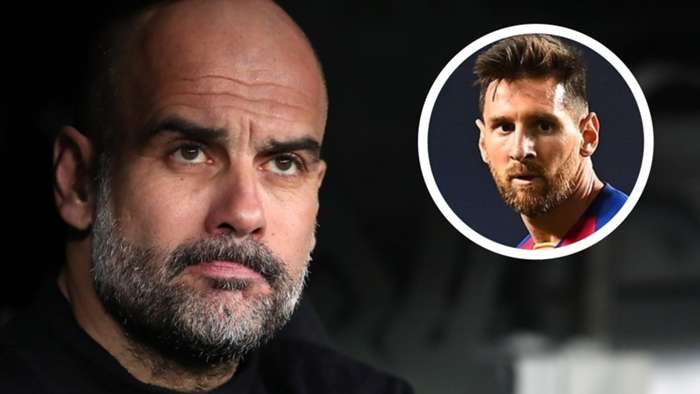 Pep Guardiola refused to be drawn on the future possibility of signing Lionel Messi after he was close to leaving Barcelona in the summer.

He would later reveal in an exclusive interview with Goal that he'd be staying put after the Catalans blocked an exit from Camp Nou.

City were one of the few clubs with the pulling power and financial strength to attract the six-time Ballon d'Or winner, with the added attraction of him working again with his former mentor Guardiola.

And when asked about the transfer and City's stance, Guardiola told reporters: "I don’t need to explain anything. Leo explained itquite well I thinkand I don’t have anything to add.

"We don’t have anything more to add. He is a football player for FC Barcelona - the club I love."

Guardiola has long hailed Messi as the best player in the world and even at 33, he still rates his undoubtedability.

Messi can walk away for nothing next summer but Guardiola, who is also in the final 12 months of his contract, did not want to comment about the possibility of the club returning for him.

"I don’t know, it’s a question for Leo Messi,"he added. "I cannot talk about the intentions for other people."

Messi cited a long-standing dispute with Barca president Josep Maria Bartomeu as one of his key reasons for wanting to leave the club.

He is now facing is a premature end to his tenure after a vote of no confidence in him was called by members at Guardiola's former club.

City are also keen on adding another central defender, with Napoli's Kalidou Koulibaly their top target but Guardiola insisted he would be happy with his squad if there were no more additions.

"Since day one when I arrived here I’m more than satisfied with what I had in the team," he said. "I know the club do absolutely everything to do their best, not just for me but for all of us.