Mendy explains why he picked Real Madrid over Barcelona 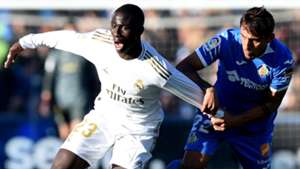 Ferland Mendy has explained that Zinedine Zidane's presence at Real Madrid was one of the decisive factors in him picking to move to Santiago Bernabeu last summer.

Having enjoyed a stellar season with Lyon, he had the option of moving to Madrid or to Barcelona but eventually plumped for the former.

On the eve of the second Clasico of the season, the France international defender has explained why he favoured a switch to the capital.

"It's Real Madrid, quite simply. Zidane, too, that was a plus," he told TF1's Telefoot program.

After an injury-riddled start to life in Spain, Mendy has begun to win himself a place as Madrid's regular left-back, having featured from the start in the majority of matches since the beginning of November, including the midweek 2-1 Champions League last-16 first-leg loss to Manchester City.

"I wouldn't say that I've imposed myself, there's still a lot of pressure," he said. "It's really different with regards to Lyon. The level of expectation is very high."

And that expectation only builds around big matches, such as Sunday's against Barcelona. It promises to be Mendy's second time facing the Catalan club since moving to Spain, having played the duration of the 0-0 draw when the sides locked horns on December 18.

"It's a match that's very different," he said. "There's a lot of impact, a lot of desire from both teams. In any case, the Clasico is a game that should be won.

"Yes, the title is at stake, but after there are still a lot of matches, too."

The Primera Division seems Madrid's best shot at silverware this season, having been eliminated in the quarter-finals of the Copa del Rey by Real Sociedad and facing a massive task to turn around their tie with City.

With 13 matches of the league season remaining, they have fallen two points behind Barcelona, having held a three-point lead prior to a home draw with Celta Vigo and a loss against Levante.