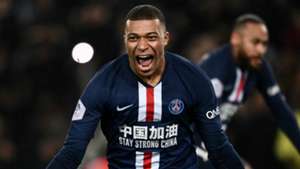 Paris Saint-Germain superstar Kylian Mbappe has been included in a preliminary list of players selected for France's squad to compete at the Tokyo 2020 Olympics.

The 21-year-old was among 80 players named for the Japan tournament, with the list to be eventually cut to 50 before its final selection of 18 under-23 and four overage players is picked closer to the July start of the event - which runs from July 22 to August 8.

French Football Federation president Noel Le Graet said Mbappe was included in the selection because of his talent and eligibility, with the Paris striker able to be included as part of the under-23 player quota.

"He's old enough to go," Le Graet said. "Like all young people of his age who have talent, he is therefore on the list."

"Club presidents, in general, find that the dates [of the Olympic tournament] are not good," Le Graet said.

"I saw Nasser. I asked him how was Mbappe. He said to me, "very good".

Mbappe has been in hot form for PSG this season, scoring 27 goals and getting 17 assists across 31 appearances in all competitions for the French capital club.

He nabbed a brace in the Ligue 1's club last outing - a 4-0 victory over Dijon put the Parisians 13 points clear on the league table after 27 matches played.

France haven't competed at an Olympic football tournament since Atlanta 1996, with a lot of the players eligible for Tokyo, including Mbappe, still yet to be born by this time.

They have won the Olympic gold medal once, with a 2-0 victory over Brazil during the Los Angeles 1984.

Brazil clinched the last Olympic gold on home soil at the Rio 2016 tournament, winning the title for the first time.

Hungary and Great Britain have won the most Olympic titles - three - while Argentina, Soviet Union and Uruguay have won the event on two occasions.

Sixteen teams will compete at Tokyo 2020 with the draw to be held on April 20.