Mbappe misses PSG training through illness ahead of Dortmund clash 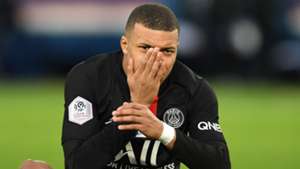 Kylian Mbappe was forced to miss Paris Saint-Germain training on Monday due to illness, with his participation in a Champions League showdown with Borussia Dortmund now in doubt.

Thomas Tuchel's men were given extra time to prepare for their latest European encounter after seeing their Ligue 1 fixture against Strasbourg postponed due to the coronavirus outbreak.

PSG were due back in action on Saturday at Stade de la Meinau, three days after beating Lyon 5-1 in the semi-finals of the Coupe de France, but ended up having to watch the rest of their rivals compete in the nine domestic matches which went ahead as planned.

Mbappe hit a stunning hat-trick against Lyon, taking his tally for the season to 29 goals in 31 appearances across all competitions.

He also played the full 90 minutes of PSG's 2-1 defeat to Dortmund in the first leg of their last 16 European tie on February 18, but he was a surprise absentee from Tuchel's group as preparations for the second leg continued on Monday.

With just two days remaining until BVB arrive at Parc Des Princes, Goal has learned that Mbappe has been struck down with sickness , and thusly did not report for training with the rest of the squad.

One man who should be fit for the encounter is Thiago Silva, who has now fully recovered from a hamstring injury he sustained last month, with Angel Di Maria, Neymar and Edinson Cavani also likely to be available.

Dortmund will touch down in France fresh from a crucial 2-1 win away at Borussia Monchengladbach on Saturday, which saw them rise to second in the Bundesliga standings.

There will be no supporters present to watch either side at Parc Des Princes on Wednesday, however, with it already confirmed that the match will be played behind closed doors due to an increase in COVID-19 cases .

The coronavirus has caused major disruptions to the football calendar across the world, with Asia the most heavily affected continent, and an agreement to postpone the upcoming World Cup qualifiers in March and June has been put in place.

Italy has been hit the hardest of all countries in Europe so far , with an estimated 16 million people quarantined in the northern region.

Serie A fixtures have continued to go ahead despite the government measures, but all matches are due to be held behind closed doors until at least April.