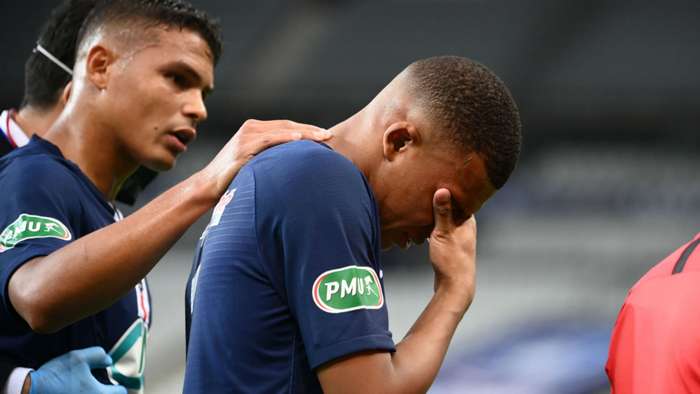 PSG lifted the cup with a 1-0 win thanks to Neymar’s early penalty, but were left with huge concern after Loic Perrin’s tackle on Mbappe, which earned the Saint-Etienne captain a straight red card.

Mbappe was clearly in distress as he left the pitch, and later reappeared on crutches.

Now, it has been confirmed that he suffered a nasty ankle sprain rather than ligament damage, with the full extent of the injury to be assessed in the next 72 hours.

PSG have the Coupe de la Ligue final to negotiate on July 31, looking to complete a domestic treble before refocusing on August’s revamped Champions League.

Thomas Tuchel’s side face Atalanta in a one-leg quarter-final clash on August 8.

While they will be considered heavy favourites by many going into the clash, Gian Piero Gasperini’s side are challenging for the Serie A title and have scored 96 goals in 36 league games this season so cannot be underestimated.

Tuchel will still have considerable attacking talent to choose from if Mbappe is unavailable but with Edinson Cavani having already departed after the end of his contract, it would be a significant blow.

If PSG do beat Atalanta, they would face either RB Leipzig or Atletico Madrid in the semi-final, after the draw was made earlier in July.

Atalanta boss Gasperini, meanwhile, has said he hopes Mbappe willrecover in time for their European game.

"I'm sorry for him, I didn't know," Gasperini told Sky Sport Italia. "Mbappe is a great guy, I hope it's not serious.

"We don't want to win due to the misfortunes of others.

"In fact, if you win against these types of players, your result means even more."

Mbappe has scored 30 goals and registered 18 assists in 34 appearances for PSG this season.