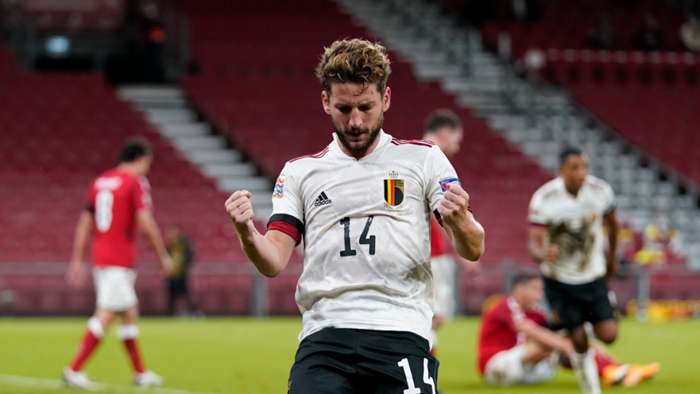 Belgium boss Roberto Martinez hailed his side's "incredible" ability to rack up wins even without key men after seeing off Denmark 2-0in Saturday's Nations League clash.

The world's top-ranked side were without Kevin De Bruyne and Thibaut Courtois for their trip to Copenhagen, while Eden Hazard remained on the bench for the whole game.

Despite the notable absentees, Belgium picked up an 11th win in a row in their first game back after a 10-month hiatus thanks to goals from Jason Denayer and Dries Mertens.

Martinez was pleased to see some of his fringe players step up as the Red Devils made a winning start to their Group A2 campaign.

"After 10months without playing together, we needed to find some rhythm," he told RTL Sport.

"Despite everything, we managed to remain threatening, scored a good goal and maintained a good attitude throughout. I am delighted with this performance.

"We miss players like De Bruyne, Hazard and Courtois, and yet the team has shown that they always know how to win. It's incredible!

"There will probably be three changes in the next game because some players can't play longer than 90 minutes.

"Thomas Meunier will probably play. But we won't make too many changes because we have to create some rhythm."

Denayer, who scored his first international goal on his 14th appearance, echoed the views of his head coach after a hard-fought victory at the Parken Stadium.

"It was difficult at first, but we regained our rhythm as the match progressed," he said. "We had players missing, and yet we have still won. It shows that the squad is very strong."

Denmark struggled to create many opportunities across the 90 minutes, with stand-in Belgium goalkeeper Simon Mignolet making just one save of note to keep out Christian Eriksen.

New head coach Kasper Hjulmand was happy with the overall display of his side but admitted the visitors' quality told in the end.

"I think we played a really good first half," he told Kanal 5. "When Belgium go in front, they are hard to deal with. They stood well and were good at defending.

"Otherwise, I think our first half was perfectly okay. We played with a great deal of intensity and got in good positions. We stopped them creating the same number of chances as usual.

"We handled the first half really well, and there were also 10-12 minutes of the second half, where I think we did what we were supposed to.