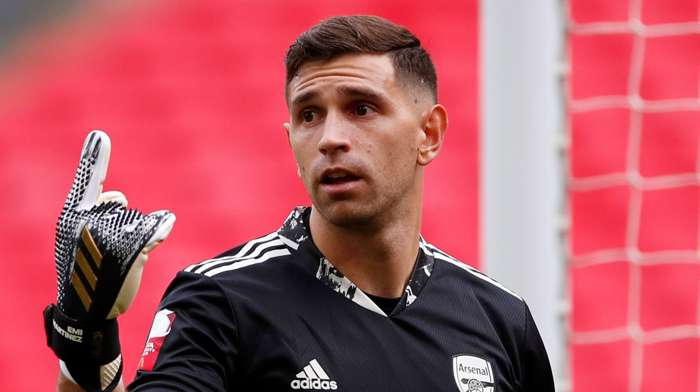 Emi Martinez is on the verge of a move to Aston Villa.

Arsenal’s goalkeeper missed Saturday’s 3-0 success against Fulham, having been withdrawn from the squad by Mikel Arteta on Friday amid increasing interest from both Villa and Brighton.

At the time, neither club had seen an offer accepted for the 28-year-old, but that changed on Saturday when Villa - who had already had two bids rejected - finally matched Arsenal’s £20 million ($26m) valuation for the Argentine.

Martinez was given permission to travel up to Birmingham by the Gunners and spent the afternoon visiting Villa’s training facilities and undergoing a medical ahead of completing his move.

The two clubs are currently putting the finishes touches to the transfer, which is expected to be finalised within the next couple of days - ending Martinez’s decade long stay in north London.

Arsenal did want to keep Martinez and had offered him an extension to his current deal - which is due to expire in 2022 - but couldn’t offer him any assurances over playing time.

And having replaced Bernd Leno following the German international’s injury last season and played such a key role in the Gunners’ FA Cup success, the keeper made it clear that he wanted to be first-choice.

But with Leno now fit again, Mikel Arteta could offer no guarantees to Martinez - who was being offered more money by Villa and being given concrete assurances over his playing time.

Speaking ahead of Arsenal’s game at Fulham this weekend, Arteta was asked about how hard it would be to keep both of his keepers happy, should they remain the club.

“Well they want (me) to know their role and at the end of the day it is one position to fill in and the other one has to support the No. 1 and the one who is playing 100%,” said Arsenal’s manager. “If you are not able to do that you can not be part of our top squad and you should not be here.”

With Martinez’s move to Villa now imminent, Arsenal will step up their search for a replacement. Third choice keeper Matt Macey was on the bench against Fulham, but he is not seen as long-term back-up to Leno.

The Gunners have a firm interest in David Raya at Brentford and the 24-year-old, who was not part of the Championship side’s squad on Saturday as they lost 1-0 at Birmingham, is understood to be keen on a switch to north London.