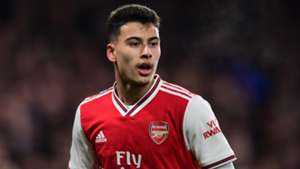 Gabriel Martinelli admits to having met Paul Pogba over the course of four trial spells taken in at Manchester United, but the Red Devils missed their chance to land the Brazilian forward and he is now thriving at their Premier League rivals Arsenal.

The 18-year-old has caught the eye with the Gunners this term after completing a ?6 million switch in the summer of 2019.

Those at Emirates Stadium moved to buy into Martinelli's potential after seeing him impress in his homeland with Ituano.

Interest from United, who boast strong ties to the South American club, was expected when an exit door swung open.

The Red Devils opted against making a move, though, with the Old Trafford hierarchy not seeing enough across a number of visits to England to convince them that the promising forward was worth acquiring on a permanent basis.

Martinelli has told FourFourTwo of his experiences with United: "There was a partnership between Ituano and Manchester United which allowed me to go there every year, for four years, to train with boys my age or older.

"That was nice, because I got a first taste of what English football was like. I met Marouane Fellaini, Patrice Evra and Paul Pogba, and made sure I got a photo with all of them.

"They didn't make an offer, so I returned to Ituano and kept doing my job there."

United's loss now looks like being Arsenal's gain, while Barcelona are another heavyweight outfit that will be asking questions of how such potential was allowed to slip their net.

Martinelli spent time at the famed La Masia academy in 2018, but no deal was done there either.

He added: "I went in November 2018 and I was training in La Masia for two weeks.

"I was not lucky enough to meet any of the players of the first team because it was the international break. I could not see [Lionel] Messi.

"Everything in Europe was new to me and I was impressed with all the things they had in these great clubs: the gym, the number of pitches."

Martinelli is now working in those surroundings on a daily basis, with a highly-rated frontman having registered 10 goals and four assists across his debut campaign with Arsenal.