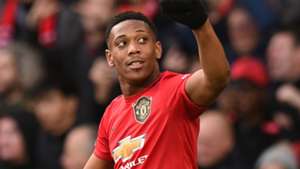 Ole Gunnar Solskjaer's men made the breakthrough 30 minutes in to take the lead at Old Trafford on Sunday.

Bruno Fernandes spotted Martial's run into the box and chipped a free-kick into the France international's path, and he obliged by squeezing the ball past Ederson at the goalkeeper's near post.

Having battled to a 2-1 victory over City at the Etihad Stadium back in December, the Reds once more held the upper hand as they went into half-time with a 1-0 advantage thanks to Martial.

He had also found the net on that occasion and at almost the exact same time, hitting United's second after 29 minutes following Marcus Rashford's early opener.

And Martial was additionally on target the previous time he kicked off a Manchester derby, scoring from the spot in November 2018's 3-1 reverse, meaning he has now scored in his last three Premier League starts against Pep Guardiola's charges.

Only Cantona, who used to revel in causing United's cross-city neighbours grief, can boast of a comparable record in such games.

Martial's compatriot indeed went even further, netting in five consecutive starts against City in a run that stretched from 1993 to 1996.

Sunday's goal marks Martial's fourth in his last six United matches and he now boasts 16 in all competitions for the Reds.

Solskjaer, though, will not let the forward rest on his laurels, calling on him to keep working as he adapts to a more central position under the Norwegian.

"If you're a wide forward, you're facing forwards more and running at people," he told United's official website in February.

"Now he's in a different position, where it is more physical and you've got to be stronger with your back to goal and be more patient. It's your job to be in the box when the ball arrives.

"I'm still at him. I demand more of him. Sometimes, the ball is squared across the six-yard line and it's where he should be. I just nudge him and say: 'It should have been a goal for you'.