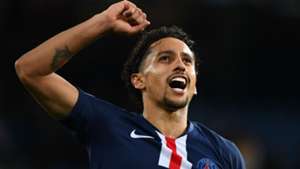 Paris Saint-Germain defender Marquinhos believes it would be better to cancel his side's Champions League clash with Borussia Dortmund than play the game behind closed doors.

The spread of the coronavirus has disrupted football across the world since the outbreak began and authorities are stepping up precautionary measures to prevent the spread of the disease during the football season.

Several games in Italy have been postponed this weekend while Juventus' Under 23 team cancelled training on Saturday and were placed under medical supervision after a member of their most recent opponents tested positive for the disease.

Meanwhile, FIFA president Gianni Infantino has suggested that the international matches scheduled to take place in March could be postponed, though he remains hopeful this summer's European Championship will not be affected.

The upcoming Champions League last-16 second legs are in danger, however, with some suggesting that the games could be played behind closed doors to help minimise the risk of aiding the spread of the disease.

PSG are scheduled to host Dortmund at the Parc des Princes on March 11, with Thomas Tuchel's team looking to recover from a 2-1 defeat in Germany.

But Brazilian defender Marquinhos feels it would be wrong to leave the fans out of the game and instead called for the game to be postponed if they plan on taking action.

"That would be a shame. If it is to be played behind closed doors, I think the best thing would be to cancel because we want our supporters and they will want theirs too," he told reporters after his side beat Dijon 4-0 in Ligue 1 on Saturday.

"I hope it doesn't happen. If this decision is made, I think we will ask to cancel the match to play with our supporters."

PSG are 13 points clear at the top of Ligue 1 after the weekend's game, in which star striker Kylian Mbappe scored twice while Mauro Icardi and Pablo Sarabia netted once each.

The capital club's next game is against Lyon in the Coupe de France semi-finals on Wednesday before they return to league action with a trip to Strasbourg.