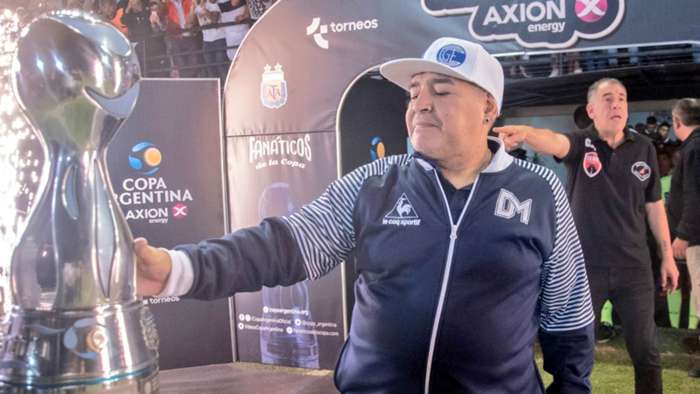 Diego Maradona has been admitted to hospital in his native Argentina, according to local media reports.

Although there has been no official word, Ole are reporting that his condition is not serious and is not related to Covid-19 as he had tested negative in recent days.

Maradona, who coaches Gimnasia y Esgrima, was last seen in public on Friday, the day of his birthday, and he was presented with a commemorative plaque ahead of his side’s game with Patronato.

The World Cup winner did not stay to watch the game, with it reported that he had been feeling unwell for a few days.

Maradona has had a number of health scares down the years.

He was admitted to hospital in January 2019 with internal bleeding in the stomach, while he fell ill at the 2018 World Cup in Russia - being filmed passing out at the game between Argentina and Nigeria.

Maradona is widely considered to be one of the greatest to play the game. He rose to prominence at Argentinos Juniors, before a spell at Boca Juniors earned him superstardom and a move to Barcelona in 1982.

He joined Napoli two years later and helped the club win the Serie A title in 1987 and 1990.

It was during his spell with Napoli that Maradona led Argentina to World Cup glory in 1986. He scored one of the great goals of all time against England in the quarter finals, along with the infamous Hand of God goal.

His five goals and five assists at Mexico ‘86 earned him the tournament’s best player award, and while he did not find the target in the final, he created the winning goal for Jorge Burruchaga.

Argentina came up short in the defence of their crown at the 1990 World Cup in Italy, where Maradona was hampered by an ankle injury.