Manchester United vs Manchester City Betting Tips: Aguero to star once again in the derby 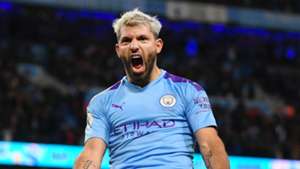 Only Wayne Rooney has scored more than the Argentina international's nine goals in Manchester derbies, while only Steven Gerrard has scored more away Premier League goals at this stadium.

Gabriel Jesus is yet to open his account against the local rivals, but can be backed at even money (2.00) to set that straight by getting on target here.

Seemingly the Citizens' new penalty taker after despatching a high-pressure spot-kick in the Champions League win over Real Madrid, Kevin De Bruyne looks likely a particularly appealing 5/2 (3.50) longer shot as he has already matched his best ever tally of eight Premier League goals.

At the other end of the pitch, Ole Gunnar Solskjaer will be hoping that Anthony Martial continues to shine despite the absence of Marcus Rashford.

Bruno Fernandes has already made a strong impression after scoring twice in his first four league matches since joining United, and he is available at 3/1 (4.00) to make himself even more of a fan favourite by grabbing a big derby goal.

Fellow January signing Odion Ighalo is also starting to repay the faith by scoring twice in Thursday's FA Cup win over Derby County, although he holds less appeal at those same 3/1 (4.00) odds to score in a match he seems destined to start on the bench.