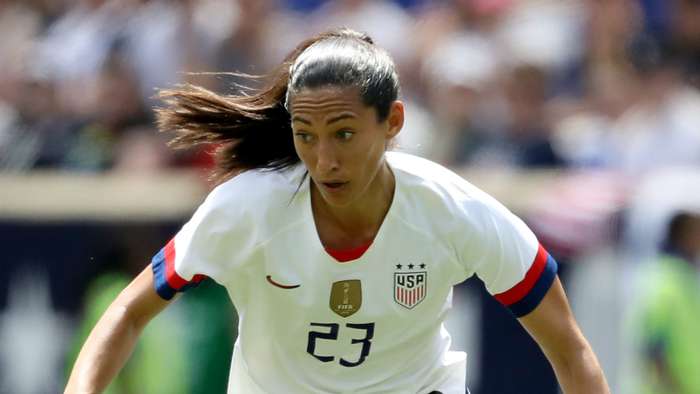 The 31-year-old, who was crowned a world champion last year with the United States and back in 2015, joins the club along with fellow international team-mate Tobin Heath, who was announced earlier on Wednesday.

The forward was on the scoresheet for the USWNT in their semi-final clash with England last summer and has scored eight goals in eight games for her country this calendar year.

Pressjoins,subject to obtaining a work permit,from the Utah Royals, for whom she has scored 10 league goals in 25 games since joining the club in June 2018.

“I’m really excited to be joining Manchester United this season," she said.

"I’m grateful to have the opportunity to play for such an elite club and beyond ready to get back on the field.

"I feel blessed to have the opportunity to continue to strive to be my best and to compete for trophies this year. I look forward to this new challenge and I can’t wait to start training with the team.”

Press has played in Europe before withSwedish clubs Kopparbergs/Goteborg and Tyreso, reaching the Women's Champions League final with the latter back in 2014.

She joined the Chicago Red Stars after losing that final, where she really made a name for herself in her homeland as a serial goal-scorer.

“Christen is a world-class player and we are thrilled to have her on board at the club," Casey Stoney, head coach of Manchester United, said.

"She has a proven record and her stats speak for themselves; she’s a ruthless striker who scores so many different types of goals, and I know she can add some real quality to our squad.

"Christen is also hugely experienced and for me it’s fantastic to add another senior figure like her in the dressing room.”

Press will not be available to make her United debut this weekend, against Birmingham City, due to quarantine rules regarding those arriving in England from the United States.

The forward, who has 138 caps for the U.S.,is the club's fifth summer signing, following Heath from the Portland Thorns, Lucy Staniforth from Birmingham, Ona Batlle from Levante and Ivana Fuso from Basel.