‘Man Utd won’t win the title with Martial as their No.9’ – Sheringham calls for more ‘top players’

‘Man Utd won’t win the title with Martial as their No.9’ – Sheringham calls for more ‘top players’ 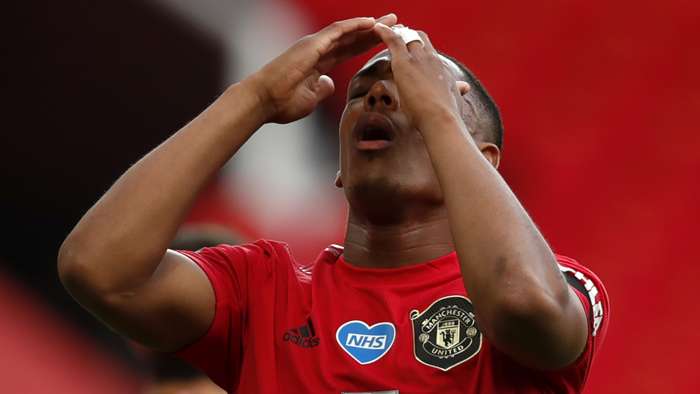 Manchester United “won’t win the title with Anthony Martial as their No.9”, says Teddy Sheringham, with Ole Gunnar Solskjaer being urged to bring in more “top players” all over the field.

There have been plenty of calls for reinforcements elsewhere, amid regular rounds of transfer talk, but getting deals over the line is proving tricky.

Sheringham feels United should be prioritising the acquisition of another proven frontman before the next deadline on October 5, with questions being asked of Martial’s ability to lead the line for an ambitious outfit – despite the Frenchman netting a career-best 23 goals in 2019-20.

“When you’re playing at a club like that, scoring 20 goals in a season is good, but you’re looking at a 30-35-goal man to be the icing on the cake. Will he be that man?I’m not so sure.”

Sheringham believes Solskjaer should also be seeking out another centre-half in order to challenge for the most prestigious of prizes.

He has been encouraged by the progress made over recent months, with a top-four finish secured and previously out-of-sorts players getting back to their best, but feels there is room for further improvement.

Sheringham added: “The optimism at Man United is high. The manager seems like he’s getting on well, seems like he’s got Paul Pogba back on side again - which is massive. It’s like having a new £100m signing. When he’s on song, he’s a top player and when he’s working hard, even better.

“Mason Greenwood coming on the scene, Marcus Rashford, Bruno Fernandes has been the missing link and now Van de Beek could be fantastic as well.

“They are not quite title contenders yet. You need top players all over the pitch. That’s what Liverpool have got, that’s what Man City have got. Chelsea are trying to get there. Man United have optimism but they still need to improve.

“They need a top centre-half, decent full backs and good midfield players all over the pitch.”

One player that United continue to be heavily linked with is Borussia Dortmund winger Jadon Sancho, but Sheringham is not convinced that the England international is required.

He said: “They’ve got a lot of flair players and speedy players. I don’t think hewould make that much difference.”