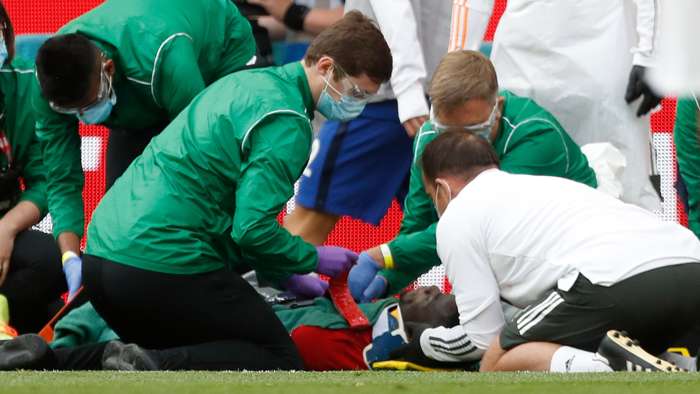 Manchester United defender Eric Bailly had to be carried off on a stretcher wearing a neck bracefollowing a clash of heads with team-mate Harry Maguire during the first half of theirFA Cup semi-final against Chelsea at Wembley.

He initially appeared to recover and gotto his feet, but quickly laid back down on the pitch.

After several minutes of treatment from the Man Utd medical team, which included placing him in a neck brace, Bailly was taken off the pitch and down the tunnel on a stretcher.

The 26-year-old had already suffered a blow to the head minutes earlier when he attempted to beat Kurt Zouma to a Chelsea left-wing cross.

Maguire also needed treatment after the incident, but was able to continue with a bandage wrapped around his head.

Anthony Martial came on to replace Bailly, as manager Ole Gunnar Solskjaer switched back to his usual 4-3-2-1 formation having begun the match with three centre-backs in a 3-4-3 set up.

Even if Bailly escapes serious injury he is unlikely to feature in Manchester United's final two Premier League matches of the season because of the Premier League's concussion protocols, which hasminimum recovery period of six days imposed from the time of the injury.

Man Utd will hope that the former Villarreal defender will be cleared in time for the resumption of their Europa League campaign, with the second leg of their round of 16 clash with LASK scheduled to take place on August 5.

The lengthy stoppage meant there were 11 minutes of time added on at the end of the first half, with Chelsea taking full advantage of the added time by taking the lead through Olivier Giroud, who metCesar Azpilicueta's cross to flick the ball beyondDavid de Gea at his near post.