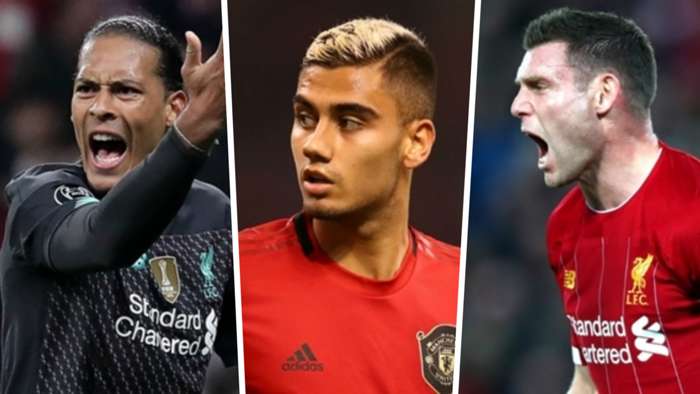 Manchester United midfielder Andreas Pereira has taken aim at a couple of rivals at Liverpool, with Virgil van Dijk and James Milner branded “arrogant” by the Brazilian.

Pereira did not spread the net far from Old Trafford when opting to single out two Premier League title winners on the books at Anfield.

He referred to Van Dijk and Milner as “marrento's”, which translates from Portuguese as arrogant or cocky.

The 24-year-old said: “I don't really like that guy, Milner.

“And to tell you the truth, I don't like that guy, the defender, Van Dijk. He is marrento, man. Even the way he plays is kind of arrogant.”

It is not the first time since wrapping up a long-awaited Premier League crown that certain figures on Merseyside have been accused of arrogance.

After sparkinga heated row with the Liverpool bench during a 5-3 defeat for Chelsea at Anfield, Blues boss Frank Lampard called on the Reds to retain a humble streak amid their recent successes.

He said: “On the bench, I've got no problem with Jurgen Klopp, he's managed his team and it's fantastic.

“Some of the bench, it's a fine line between when you're winning and they've won the league, fair play to Liverpool Football Club, but also don't get too arrogant with it. In match play you get emotional and that was it.”

Pereira would appear to share Lampard’s way of thinking, but there are plenty of players in England that he is a big fan of.

Unsurprisingly, many of those are fellow Brazil internationals, with star turns on the books at Arsenal and Chelsea sitting among his favourites.

“David Luiz and Willian are the good guys,” said Pereira, who admitted to enjoying meeting up with familiar faces before big games.

The United academy graduate also picked out Paris Saint-Germain defenders Thiago Silva and Marquinhos as players he holds in the highest regard, as well as Real Madrid’s talismanic skipper Sergio Ramos.