Man Utd should play Rashford and Martial up front together to 'take it to the next level', says Yorke

Man Utd should play Rashford and Martial up front together to 'take it to the next level', says Yorke 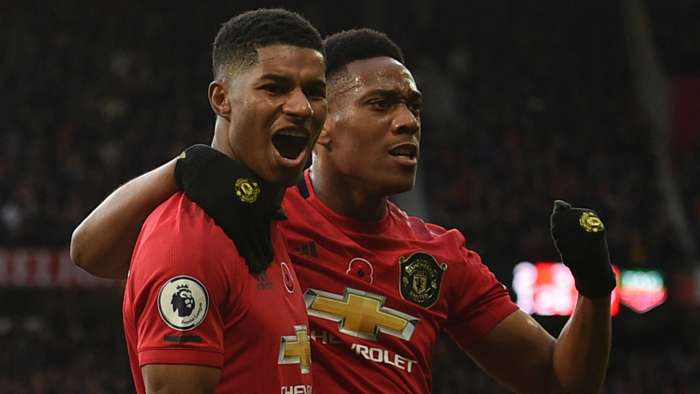 Manchester United legend Dwight Yorke would like to see Ole Gunnar Solskjaer change his formation and play with a front two of Marcus Rashford and Anthony Martial.

The Norwegian coach has favoured either a front three or a 4-2-3-1 this season, with Martial and Rashford alternating as the central striker.

While that approach has brought varying levels of success – with both forwards on the cusp of breaking the 20-goal barrier in all competitions –Yorke believes that United would benefit more from using the pair together in tandem.

"A No.9 is a specialist position and that’s why Alan Shearer and Andy Cole scored so many goals– they didn’t play anywhere else," Yorke told Goal.

"I like Rashford through the middle, although I think he could play as a No.10, as he is intelligent enough. So, he could be a No.10 or a No.9 any given day. I like Marital down the middle as well.

"So, I would go down that road and put both up front. Then, you could have Bruno (Fernandes) and (Paul) Pogba providing some attacking flair from behind, with (Mason) Greenwood and those guys supporting them from the flanks.

"Let them have a go at defenders and take it to the next level."

Martial has occupied that No.9 role for the majority of the season and scored his first career hat-trick against Sheffield United last week but despite his impressive goal tally this season, he has been criticised for a lack of consistency in recent seasons.

However, Yorke, who won the treble with United in 1999 and developed a great partnership with Cole, would like to see Solskjaer stick with the Frenchman.

“He just needs to be given a chance to play there because the No.9 position is a specialist one, it’s one of the hardest positions playing with your back to goal. It’s not an easy position and you have to give them time to really master it if you’re going to get the best out of him,” Yorke said.

“He looks like he wants to play and the only way he’s going to improve is give him the chance to play there all the time instead of shipping him out left and right. That’s all part of your football education.”

With United in fine form since the Premier Leaguerestart, Solskjaer has an abundance of options up front.

Martial and Rashford both have 19 goals in all competitions and Greenwood is on 13, after a fine display against Brighton last week.

The teenager has been tipped for a long and successful career at Old Trafford and Yorke is confident Solskjaer will ensure Greenwood remains grounded.

“It’s very difficult, especially now with the social media and the attention that you get at this level, I think it’s alright to be compared with people," Yorke said of the similarities being drawn between the youngster and Robin van Persie.

"As a player, you’ve got your manager and your family around you to make sure you continue to keep a level head and not get ideas above your station.

“I think you just have to look at Greenwood and his demeanour to see he’s just a kid enjoying himself. I like that approach.

"And he’s got the right man leading him. Ole also only wanted to make headlines with his football when he was a player."

But how does Greenwood fit into United’s attacking line if Yorke thinks they should be playing with a front two?

“You don’t put too much onus on him because, at 18, you’re still learning the game and you’re just happy to be in the team,” the former United striker said.

“In two or three years he will develop more, he will get stronger and become a man. Then, you can see what position he feels most comfortable in.

"But, at this stage, you just want him to express himself, you don’t want him to think too much and I think it’s too early to really start saying he would be a better centre forward or right winger.

"He’s doing just fine at the moment and when you start tinkering too much, it stops working. He’s still a kid. Just let him go out there and enjoy himself.”