‘Man Utd have been sloppy, not all over the place’ – Maguire buoyed by return of clean sheets 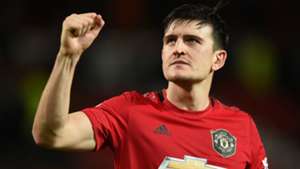 Harry Maguire admits Manchester United have been "sloppy" at times this season, but says they have never been "all over the place" and are taking plenty of heart from a flurry of clean sheets.

The Red Devils have secured shutouts in eight of their last 10 matches.

Arch-rivals Manchester City were the latest opponent to draw a blank against Ole Gunnar Solskjaer's side in a passionate derby date at Old Trafford on Sunday.

Maguire and Co stood firm in that contest to snuff out the threat posed by Sergio Aguero, Raheem Sterling and an abundance of other attacking riches at Pep Guardiola's disposal.

Defensive leaks are being plugged in some style, with consistency and stability at the back presenting United with a platform on which to build bids for a top-four finish and major silverware.

"Eight in 10. Defensively, all season, we have not been a team that has been all over the place and conceding numerous chances. We have never been that team.

"We have conceded sloppy goals at sloppy moments. Set-plays, long-range shots, special goals but, lately, we have cut it out. We have been defending set-plays and I can tell you that is a big bonus.

"It is the key to start picking up good results and that is what we have done."

United earned plenty of plaudits for the manner in which they ruthlessly swept aside City on home soil, but Maguire believes there is even more to come from Solskjaer's team as they seek to become a dominant force once more.

The England international defender added: "We don't want to be a team that gives up possession really easily. In terms of the game, the way it panned out when they had the ball, we as a back-line, I didn't feel under threat.

"I didn't feel there was any need for me to start telling the full-backs or centre-halves to start jumping more, or trying to start putting pressure on higher up the pitch because we were 1-0 up and didn't feel under threat in terms of them creating chances.

"Without the ball, we pressed them really well, the midfield and forwards ran tirelessly for the team and didn't give them a sniff to get their head up and create a chance. The back-line defended our box really well.

"However, it is a big win against our rivals. It is nice to do the double over them but, most importantly, it is a big three points to close the gap on where we want to be at the end of the season."

United continue to sit fifth in the Premier League table, but are only three points adrift of Chelsea directly above them and five behind third-placed Leicester.