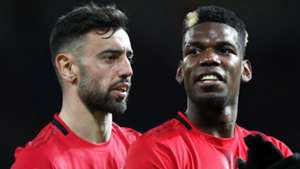 Paul Pogba has been told that Manchester United do not "need him anymore", with Paul Ince suggesting that the emergence of Bruno Fernandes could lead a World Cup winner through the exits.

A France international midfielder has appeared to be heading in that direction for some time.

Pogba admitted in the summer of 2019 that he was ready to embrace a new challenge away from Old Trafford, with talk of interest from Real Madrid and Juventus never far away.

It could be that he sees a transfer wish granted 12 months on, with the current campaign having become an injury-ravaged write off.

With Pogba ruled out of his plans for long periods, Ole Gunnar Solskjaer has sought inspiration from elsewhere in the United engine room.

The likes of Fred, Scott McTominay and Nemanja Matic have raised their respective games, while January signing Fernandes has quickly become a talismanic presence.

With the Portuguese playmaker thriving, and a supporting cast impressing, Ince believes United will be tempted to finally rid themselves of the distraction that Pogba has become.

The former Red Devils star told Paddy Power of a player who has failed to produce his best since returning to England in 2016 as part of a record-breaking ?89 million ($116m) deal: "Fans thought Paul Pogba was going to be the star, but look how that panned out.

"If he still wants to leave I'd say it would be far easier for Ole to do so now that Bruno is around. It doesn't feel like they need him anymore.

"His truly great games have been few and far between, so the current situation could suit club and player.

"If he does come back before the end of the season, he's not even going to get in the team. He's going to have to fight for his place - if he even gets one."

Pogba has been restricted to just eight appearances for United in the 2019-20 campaign.

He is closing in on full fitness once more, with there a desire on his part to see competitive game time ahead of Euro 2020, but it remains to be seen what role he will have to play for the Red Devils.

Solskjaer has suggested that he would like to use Pogba in tandem with Fernandes, but dropping those displaying greater consistency will not be easy.

United, who remain in the hunt for a top-four finish in the Premier League, will be back in action on Thursday when taking in the first leg of a Europa League last-16 showdown with LASK.