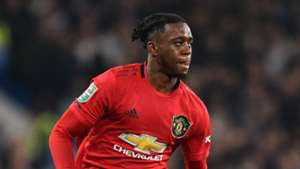 Manchester United are making progress under the stewardship of Ole Gunnar Solskjaer, according to Aaron Wan-Bissaka, who thinks the team are now ready to start challenging for major honours.

Since being appointed as United's new permanent manager in March of last year, Solskjaer has set about stamping his own mark on the squad, with a view to restoring the fluid, attack-minded identity which garnered so much success while Sir Alex Ferguson was at the helm.

The Norwegian was able to add Daniel James, Wan-Bissaka and Harry Maguire to his ranks in the summer transfer window, having set his sights on young, homegrown talent to provide a foundation for his long-term vision.

Wan-Bissaka has fully justified the ?50 million ($65m) United paid Crystal Palace for his services during in his first season in Manchester, nailing down a spot at right-back and further enhancing his reputation as one of the Premier League's most tenacious tacklers.

The 2019-20 campaign has been a mixed one for the Red Devils overall, to say the least, but they appear to have turned a corner since the arrivals of Bruno Fernandes and Odion Ighalo in January.

An eight-match unbeaten run has seen Solskjaer's men re-emerge as top-four contenders while reaching the latter stages of both the FA Cup and Europa League, with the defence recording six shutouts during that productive period.

Ahead of a derby meeting with arch-rivals Manchester City at Old Trafford on Sunday, Wan-Bissaka has talked up the prospect of United adding to their trophy cabinet once again after two successive years of failure.

"I think we're in a better position than when I joined," he told the United Review. "We didn't start off great at first, not as the club is expected to do, so I think we're moving in the right direction now. I'm very excited about the future. I think we're getting closer to reaching our target.

"I came to this club to win trophies and I know that this team is capable of winning trophies. I think it's a process. We're going in the right direction and that's what we're aiming for."

Wan-Bissaka added on the importance of United winning their first piece of silverware with Solskjaer as soon as possible: "I think that will help a lot, getting our hands on the first trophy.

Leicester City's Ricardo Pereira leads the Premier League's tackling chart on 117, but Wan-Bissaka is currently in second on 91, and he still believes he can finish ahead of his Portuguese counterpart come May.

"I think I'm second at the moment, and I'm happy with that for now, just to be right up there," he said. "First place is the target by the end of the season!

"It's going in the direction that I want it to go. I'm working hard and improving my game all of the time, and I just want to continue doing that."