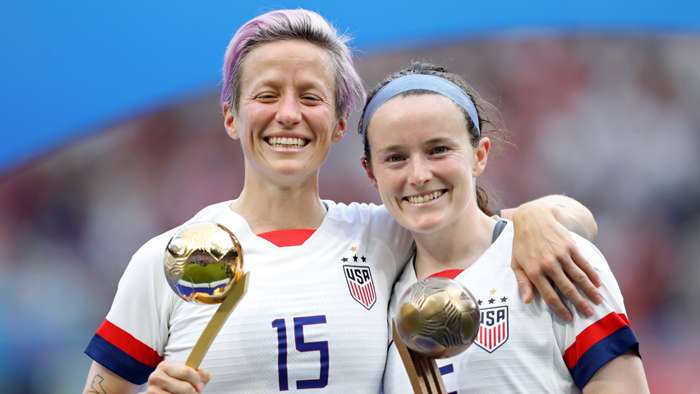 Manchester City have announced the signing of USWNT midfielder Rose Lavelle, who joins the club after four seasons in the National Women's Soccer League.

With 45 international caps to her name and 12 goals, she joins fellow World Cup winner Sam Mewis at the Academy Stadium, the latter having also signed this month with Gareth Taylor's outfit.

Lavelle, who won the Bronze Ball for her country in France last year and will wear the No.21 shirt at City, told the club's official website: “I’m so excited to join Manchester City and I can’t wait to play alongside some really talented players.

“I’m looking forward to the opportunity of playing in England and competing in the Champions League.

“After talking with Gareth about the team and how he saw me fitting in, it seemed like a great environment that would really push and develop me as a player.

“I’ve heard amazing things about the club and it just felt like a really good fit overall. I want to challenge myself and feel that Manchester City is the perfect environment to do so and hopefully, I’ll find some success along the way.”

Head coach Taylor is understandably delighted with the signing, stating: “We’re thrilled to have secured Rose’s services – with her impressive back catalogue, she is an incredibly exciting player and one we’re all looking forward to working with.

“Her endless accolades for both club and country are proof of what a talent she is and she’s exactly the kind of player we want here at City, with her ambitions and desire for success matching our own.

“I’m extremely excited to see her make her mark on the Barclays FA Women’s Super League this season in what will hopefully be a successful campaign for Manchester City Women.”

Gavin Makel, head of women’s football, added: “Over the last few years, we have followed Rose’s career with huge interest and watched her grow into one of the best attacking midfielders in the world.

“She is a highly technical and intellectual player who will give us another threat in the attacking third, and who will further strengthen the squad that we already have in place.

“I’m extremely pleased with our recruitment so far this summer and Rose’s signing is another example of our intentions with the league becoming more competitive.