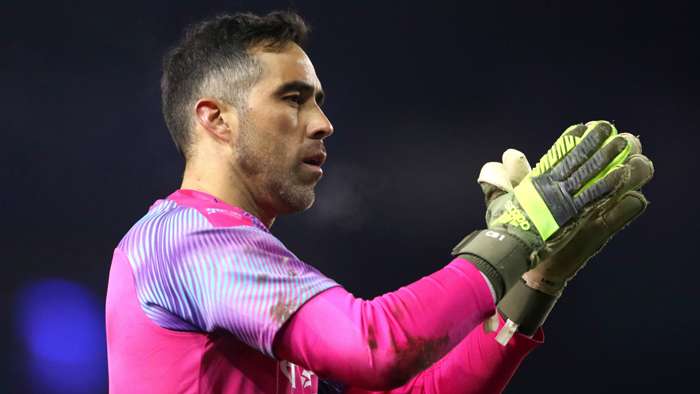 Manchester City goalkeeper Claudio Bravo is set to sign for Real Betisashis four-year stay in the Premier League draws to a close.

Newly-appointed Betis boss Manuel Pellegrini, who won a league title at City in 2014,expressly requested for the club to make a move for the 37-year-old, having seen the team concede the second-highest number of goals in La Liga last season (60).

Bravo will likely be handed the No.1 jersey at Benito Villamarin Stadium as soon as his return to Spain is confirmed, after spending the last three years of his career serving as a back-up 'keeper in Manchester.

When Pep Guardiola arrived at the Etihad Stadium in the summer of 2016, one of his first actions was to bring in the Chilean from Barcelona.

Bravoendured a difficult first season in the Premier League, however, with his performances between the sticks often called into question as City failed to keep pace with Chelsea at the top of the table.

The Blues moved to bring inEderson from Benfica at the end of thatcampaign, and the Brazilian has served as the club's first-choice goalkeeper ever since.

City have gone on to win two league titles, three Carabao Cups and one FA Cup with the 26-year-old, as he has established himself as one of the most consistent shot-stoppers in Europe.

Bravo, meanwhile, has taken in 17 appearances in all competitions this season as Ederson has dealt with variousniggling injuries, but he has not been offered the chance to extend his stay at the Etihad.

The former Barca star is now all set to join up with a Betis side that finished way down in 15th in the Liga table in 2019-20, narrowly avoiding relegation after losing their final three fixtures.

Granada goalkeeper Rui Silva had been Betis's top goalkeeping target although sources have told Goal that they were unable to convince 26-year-old to make the move, leading to discussions with Bravo.

MLS outfit New York City FC had been tipped to sign the Manchester City goalkeeperearlier this year, whileArsenal, Celtic and Galatasaray had also been credited with an interest in his services.

It is Betis who have moved to sign the 37-year-old, however, with Bravo, who is looking forward to working alongside fellow Chilean Pellegrini,still believing he has at least two seasons at the top level.