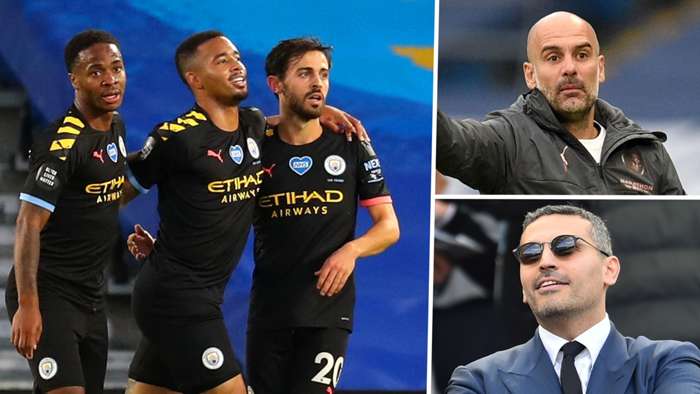 Manchester City may have an FA Cup semi-final and Champions League mini-tournament still to look forward to this season, and yet the biggest result of their campaign will be delivered at 9:30am BST (4:30am ET) on Monday morning.

Now all eyes are onthe Court of Arbitration for Sport (CAS) for their judgment over whether City will be allowed to play in Europe next season .

City were banned from continental competitionfor the next two years by UEFA backin February after committing"serious breaches" of Financial Fair Play (FFP) regulations between 2012 and 2016.

The club appealed the decision and say they expect it to be overturned because of “irrefutableevidencethat the claims are not true” when the judgment is announced.

Whatever CAS decides, the implications will be huge.

UEFA’s FFP rules could be left in tatters should City's ban be overturned. On the other hand,City’s image could be further tarnished and their short-term future seriously impeded if it is upheld.

City's stars have remained committed to the club throughout the appeal process,but European giants will be eyeing up some of their biggest assets if they were to be excluded from Champions League football.

Raheem Sterling has admitted he would like to play abroad at some point during his career and, while he is happy at the Etihad Stadium, that decision could potentially be expedited.

Given that, his performance and hat-trick against Brighton showed just why he has become so valuable toGuardiola's side, and why it would be a travesty if Citywere to lose him in his peak years.

City dominated the game at the Amex Stadium,but it took a moment of simplicity and brilliance from Sterling to break the deadlock as the England international stepped inside to create space before curling a low 25-yard drive into the bottom corner.

Two second-half headers - one clinical, one slightly fortuitous - took him to a best-ever total of 27 goals for the season while he is also now second only to Sergio Aguero in terms of league goals in City's entire history.

Despite persistent rumours linking him with Real Madrid, City remains Sterling's ideal location if he is to fulfil his dream of winning the Champions League, particularly playing alongside the brilliant Kevin De Bruyne.

That could yet be how this season culminatesthe way the pair have returned from lockdown, with Madrid at the Etihad and then, City hope, the remaining rounds in Lisbon to come.

De Bruyne, 29 last month, is at the very top of his game right now. The Belgium midfielderpicked holes in Brighton's defence to create chances for Gabriel Jesus, Riyad Mahrez and Sterling, but frustratingly for him none were taken as he bids to breaks Thierry Henry's Premier League record of 20 assists in a season.

At the other end, the backline were rarely rattled by the Seagulls. Teenager Eric Garcia has emerged as a solid partner to Aymeric Laporte at the heart of the defence while full-backs Kyle Walker and Benjamin Mendy have cemented themselves as Guardiola's first choices.

That has not been the case all season, however, andis why Liverpool have won the title so easily. As a result there will be reinforcements brought in during the transfer window.

Those targets could well depend on the verdict from Lausanne.

A positive outcome and Guardiola can go shopping for his first choices using the lure of joining a squad that will be considered among the early favourites for next season's Champions League.

A negative decision for City and his 'most wanted' may take a little more persuading.

Guardiola, himself, remains confident having seen the evidence that the club presented to CAS, and says his players deserve their place in Europe for the way they have performed.

"Today we achieved one incredible challenge, that's qualification for the Champions League next season," he following the Brighton win. "That is the minimum challenge for the top-five or where the top-seven want to be. We deserve to be there because we won it on the pitch.

"Hopefully on Monday, UEFAwill allow us to playwhere this team and these players deserve to be."