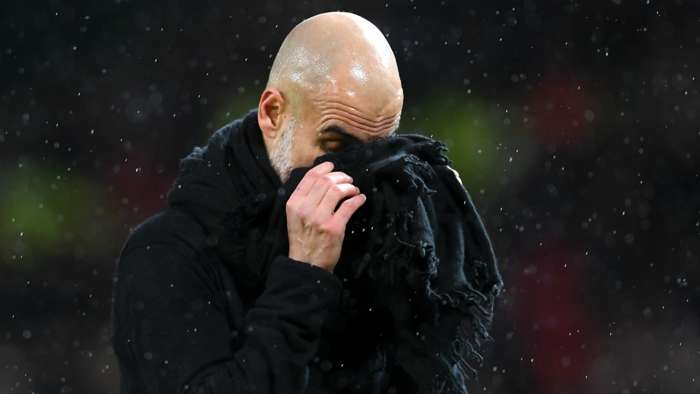 Pep Guardiola has revealed that Manchester City chairman Khaldoon Al-Mubarak is "not happy" with him after the club's failed title defence.

Eight trophies have been collected over the course of his four-year reign, including two Premier League titles, with the Blues emerging as the dominant force in English football.

Liverpool lost out to Guardiola's men by the narrowest of margins last term, but they used that disappointmentas motivation for a relentlessmarch to glory in 2019-20.

The Reds have successfully knocked City off their perch, picking up a first league crownin 30 years with a recordseven games to spare after their rivals' defeat at Chelsea on June 25.

Jurgen Klopp's men are on course to finish the season top by thebiggest marginin history, as City currently trail the new champions by 21 points.

They can also set a new points record of 102 if they win they're remaining three fixtures, with Guardiola insisting City's struggles for consistency have not gone unnoticed in the board room.

“I’m critical of my club,” Guardiola told a press conference ahead of a midweek clash with Bournemouth.

“Internally, when I don’t like something I say to my chairman, but my chairman is not happy with me.

“We finished 21 points behind Liverpool. He’s not happy with me, but we discuss internally to try and do better next season, to convince them. But always on the pitch.”

The 49-year-old's current contract with City is due to expire next summer, and although he has yet to make a final decision on his future, he has no doubts that the club will continue to be successful regardless of his presence in the dugout.

“This club is incredibly solid with Pep and without Pep,” Guardiola added.

“This club had success before my arrival here, with Roberto Mancini and Manuel Pellegrini, they won a lot of titles and played really good football.