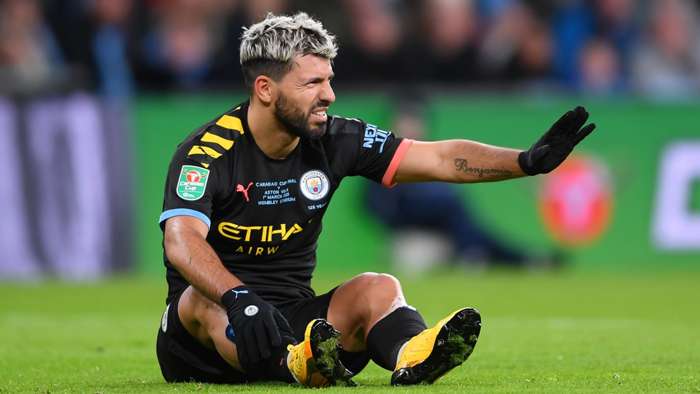 Manchester City can "deal with" Real Madrid without Sergio Aguero, says Ilkay Gundogan, who has challenged his team-mates to "step up".

The Argentine striker has already returned to the gym for light individualtraining, but Pep Guardiola has confirmed that he will be unavailable for next month's crucial showdown with Madrid at Etihad Stadium.

The Blues beat the Blancos 2-1 in the first leg of their last 16 Champions League tie at Santiago Bernabeu back in February, thanks to goals from Gabriel Jesus and Kevin de Bruyne.

Guardiola opted to start Jesus ahead of Aguero in the Spanish capital, a risk which paid off as Madrid struggled to cope with City's high-intensity approach in and out of possession.

The Brazilian could be asked to lead the line again in the return, but Gundogan also believes a positive result can be achieved with a false nine.

Although the Germany international admits that Aguero's presence will be missed, he is confident that City have enough strength in depth to reach the quarter-finals on August 7.

“It is definitely disappointing to not have Sergio available,” Gundogan told the club's official website.

“We wish him a speedy recovery and to have him back as soon as possible, because he is such an important player for us.

“We have to deal with injuries, as we did in the season with Aymeric Laporte not being available. We have to do the same now with Sergio’s situation. I am sure we will be able to do that.

“Other players will have to step up. We have Gabby Jesus, who is an amazing player, but we also have different players who can play as a false nine.

“I am sure we will be able to deal with it, but of course, we will miss him.”

When quizzed on how he will set up against Madrid after seeing Aguero sidelined last month, Guardiola named Gundogan among those capable of filling a prized asset's boots in the final third.

The 29-year-old insists there are plenty more suitable candidates for the role than him within the City squad, but has pledged to give his all to the task if selected in an unnatural position.

“I still see a few players in front of me for that position. If I have to play there, I will and I will try do my best to help the team in the best possible way, as I always do.

“It doesn’t matter for me. There are positions I prefer to play, but my aim is to always do my best to help the team as much as possible.