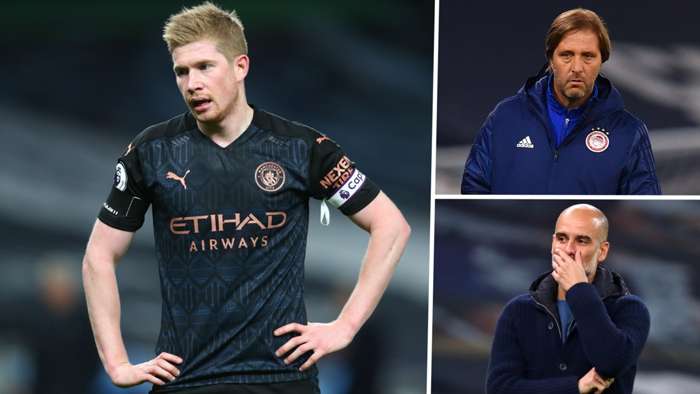 Manchester City are good enough to win the Champions League, according to Pedro Martins, but the Olympiacos coach says Pep Guardiola's side are not quite on the same level as titleholders Bayern Munich.

However, City were far from comfortable until Gabriel Jesus scored their killer second goal, in the 81st minute. Indeed, Olympiacos had missed several chances to equalise, with MathieuValbuena, most notably, firing wide from close range.

That defeat has left the Greeks in a perilous position in Group C, with just three points from three games. Another loss to City would take qualification out of their hands.

Martins, though, is optimistic about his side's hopes of springing a surprise. He has the utmost respect for City, particularly in possession, but he does not believe they are not as formidable without the ball as Bayern, whom Olympiacos faced in last year's group stage.

Olympiacos also have a good recent record against English sides in Europe, knocking Arsenal out of last season’s Europa League, and holding Tottenham and Wolves to draws at home.

So, Martins says his players are happy to have another crack at City.

“Even in Manchester, we had a very good second half,” the Portuguese coach tells Goal. “Until the second goal, we were looking for an equaliser and it was a fantastic reaction, given we played so badly in the first half.

“I think we can do it again. We know it's a difficult game because City have a fantastic team. They are strong in all aspects of the game. But against Wolves, Arsenal and Tottenham, we had two very good matches. So, we will play our game.

"If you compare all the games against City, nobody did what we did with the ball. We had 46 per cent possession – this is good data for us. I don't see anybody else doing this against City because everyone knows how strong they are in possession.

"They also create problems when they first lose the ball as their first reaction in terms of winning it back immediately is very strong. But I see Munich pressing their opponents all the time.

"Against City in the second half, we played our game. Against Bayern, in the second game after I took over, they never gave us a chance to play our game.

“They put us under fantastic pressure and we never got into the game. They constantly destroyed our intentions to play offensively.

“City are different because possession is the big objective for them. When they lose the ball, they put you under pressure also but it's not like Munich; they are more intense.

“But both are fantastic teams and both have a chance of winning the Champions League.”

Martins is also buoyed by his side's fine form, with Olympiacos top of the Greek Superleague, having won six of their opening seven matches, scoring 15 goals in the process.

However, they could be without eight first-team players against City due to illness and injuries, while the Portuguese feels that the absence of fans due to Covid-19 restrictions is also a major disadvantage for the hosts.

“When we don't have fans, it's not the same,” he says. “We are excited for when the pandemic ends for many reasons but also to feel the passion in the game with the fans back in the stadium.

“In Greece, they are fanatical supporters, and they are particularly amazing in the Karaiskakis. Football without supporters is not the same and I hope we can have them back soon.”

On the plus side, Wednesday's game means another chance to catch up with City goalkeeper Ederson, whom he worked with earlier in his career at Rio Ave.

“He has great quality but he's also very important for the game of Guardiola,” Martins adds.

“Some coaches don't want this or it is not important for them, but for Pep it's very important to have a goalkeeper with good feet who can put the ball wherever he wants.