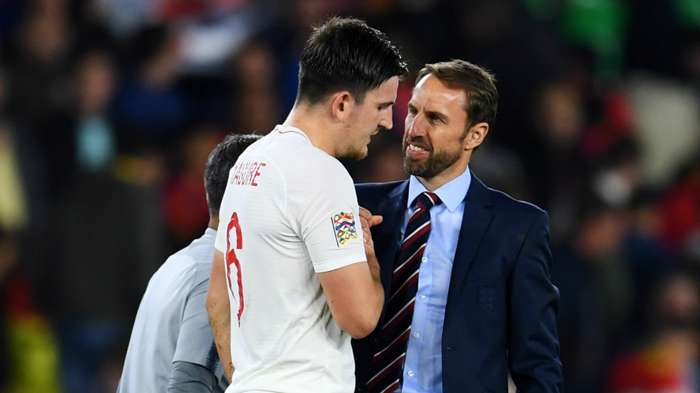 Gareth Southgate is eager to get Harry Maguire back in the England picture next month as the defender awaits a retrial.

Manchester United captainMaguire, along with two other defendants, was foundguiltyof aggravated assault, resisting arrest, and repeated attempts ofbribery at a misdemeanours courtlast monthfollowing an incident involving police on the Greek island of Mykonos.

The 27-year-old, who has denied all charges against him, was given a suspended prison sentence, though he has appealed against the conviction, which, in accordance with Greek law,has therefore been nullified and a full retrial in a more senior courtwill now take place.

Maguire was initially named in the England squad for the forthcoming Nations League matches with Iceland and Denmark before being dropped , but Three Lions boss Southgate is hoping to welcome him back at the next opportunity.

With England facing Wales, Belgium and the return clash with Denmark in October, theformer Leicester City star may not have to wait long.

"We have been in touch right the way through the last two and a half weeks. It's clearly been a really difficult period for him," said Southgate.

"The last few days have been important for him to be able to relax,get away from all the attention and geta rest, mentally get a rest.

"Of course he had a short break anyway but ...the events that happened in Greece really dominated that, so I think he needed that switch-off and he'll be able to go back to his club.

"Absolutely we would be looking to involve himin October."

Speaking last weekto the BBC about the incident, Maguire said he feared for his life after claiming he and his friends came under attack from plain-clothed police.

"My initial thought was I thought we weregetting kidnapped. We got down on our knees, we put our hands in the air," he said.

"They just started hitting us, they were hitting our legs, saying, 'my career's over. No more football. You won't play again'.