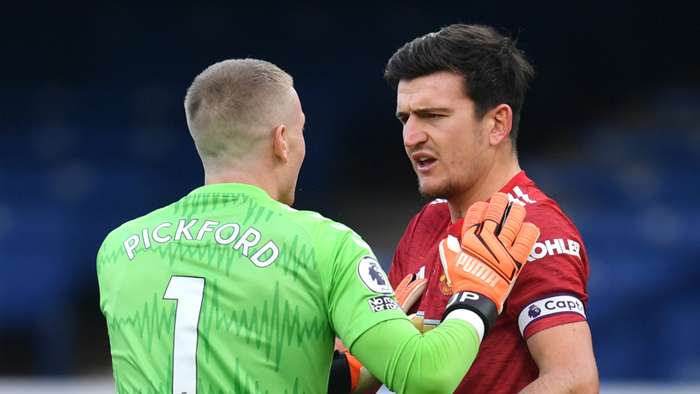 Manchester United captain Harry Maguire has admitted that if he had been awarded a penalty in Saturday’s 3-1 win against Everton, it would have been a “soft” decision.

Pickford has found himself in an unwanted spotlight in recent weeks, having been the antagonist in a collision that saw Liverpool captain Virgil van Dijk ruled out for the rest of the season because of a serious knee injury.

On this occasionhe was cleared after a VAR check from referee Michael Oliver, and Maguire feels that on balance that was probably the correct call.

“I just explained this in there, I personally don’t think it was a penalty,” he told the club’s official website.“I think maybe I fouled Jordan first. I did put a hand into his chest when he went to catch the ball and I did feel contact on my knee.

“I felt like I probably pushed Jordan before and I know everyone’s probably trying to jump on him dropping the ball but I did feel like I pushed him. I’d say a penalty would have been a little bit soft.”

Maguirefelt it was important that United got back on track after a disappointing week, in which they had not impressed in a 1-0 home loss to Arsenal or in a 2-1 away defeat to Istanbul Basaksehir in the Champions League.

“Sometimes it’s difficult for the lads but today we reacted really well to two poor results,” he said. “We felt like we let ourselves down against Arsenal.

“On another day, Arsenal could have been a different result. It was a tight, edgy game, but we don’t want it to be tight and edgy when we’re playing at Old Trafford. We want to dominate the game. We gave them a soft goal and they went on to win the game.

“In the week, we again gave them a soft goal to take the lead and we found it hard to create chances to come back. We knew it was an important game to come here and get three points. The boys reacted really well but as we know it’s only a start.”