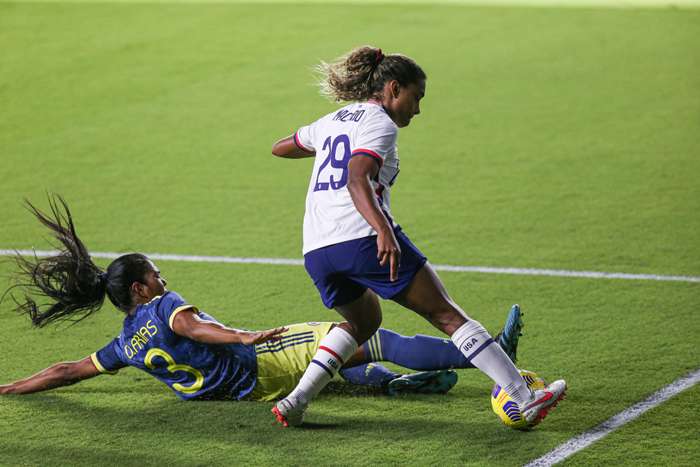 The U.S. women's national team easily defeated Colombia 6-0 on Friday night in Orlando, following on from Monday's 4-0 win over the same opponent.

Here are three of the biggest takeaways from Friday's match at Exploria Stadium.

January camp saw the USWNT debut of Catarina Macario, who by all accounts is poised to be the team's next major star. The Brazil-born attacker, who recently signed with European power Lyon straight from Stanford University, earned her first cap on Monday before scoring her first national team goal on Friday in the third minute.

"Cat is a different kind of player than I think we've ever had. She's a different No.9 than we've ever had," Megan Rapinoe said of the 21-year-old after Friday's game. "She drops in a little bit more, plays more like a false nine.

"Physically, she's already ready to be at this level and that's a huge jump for a lot of people to go from college to this level to be able to compete physically.

The U.S. got a major scare when Sam Mewis collided with a Colombia defender midway through the second half. The Man City midfielder appeared to be in a significant amount of pain on the field after her left ankle rolled underneath her. She was able to slowly walk off the field under her own power before being seen on the bench with ice wrapped around her ankle.

Mewis has been in stellar form for the USWNT and Man City. Rapinoe called her "the best player in our team right now" after the game, so any injury issue would be a major concern for club and country.

Andonovskisaid that Mewis would be examined after the match, adding that her high pain threshold made it hard to determine her prognosis right away.

"She's very strong and very tough," the USWNT coach said."When we first asked how she was she said: 'I'm fine, I'm fine,' but we are doing all the exams and following all the protocol to make sure she's fine.

"She's tough and we don't know what 'fine' means in her world. Pretty soon we're going to know how she feels."

Crystal Dunn and Midge Purce are both natural attackers who have been moved to defense with the USWNT. Dunn, most notably, converted from a dynamic attacking midfielder to a rock-solid left-back who starred during the USWNT's run to the 2019 World Cup.

Fans have been clamoring for both players to get a chance in attack for the U.S. and on Friday night, Andonovski obliged. Purce in particular grabbed the headlines by scoring her first USWNT goal with a header from Carli Lloyd's cross in the 86th minute.

"We know that Midge is a good forward,"Andonovskisaid of a player who had been mostly used as a right-back with the national team.

"Obviously we saw something in her that may help us or help her become a good fullback and we're going to continue working as we go forward. But when we need a forward, obviously she's good enough and she showed that she can do a good job there."