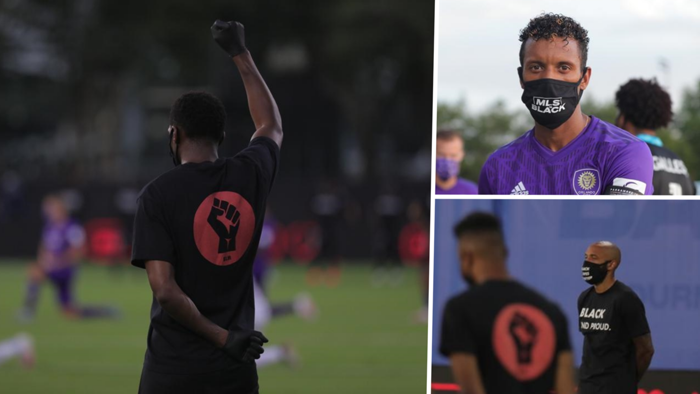 At some point during this month-long competition, the MLS is Back tournament will be about soccer. That isthe goal, after all.

However, in the lead up to Wednesday night's opener between Orlando City and newfound rivals Inter Miami, it became abundantly clear that this night would not be about soccer. Instead, a match that many hoped would be a distraction rapidly became a massive mirror held up to a country that is very much still in crisis.

Wednesday's clash between the two Florida rivals ended as a 2-1 win for Orlando City, with Nani scoring a thrilling stoppage-time winner.

At some pointthat will matter, but the overarching theme of the day was much more about the two issues that very much exist outside of MLS' much-discussed bubble: racial inequality and the ongoing coronavirus pandemic that continues to run rampant throughout the country.

No matter how strong a bubble is, it can be punctured, and the U.S. is a country still nursing two massive puncture wounds.

The fight for social justice continues to move forward, even if mass demonstrations across the country have become fewer in number. The coronavirus, meanwhile, continues to infect thousands of people a day in the U.S., where there have been 3.1 million confirmed cases so far.

In the days before Wednesday's opener, the ongoing pandemic once again showed that even the best-laid plans often go awry. The league's Orlando plan, developed over numerous discussions with several months to prepare, has already hit two major snags.

The first was headlined by FC Dallas, who were hit with 11 positive cases before withdrawing from the tournament altogether.

The second is Nashville, who have also been hit with a series of positive tests, with MLS commissioner Don Garber saying a decision on the club's tournament future is forthcoming. As a result, the format is up in the air, with the league scrambling to reschedule games.

As much as MLS tried to control this scenario, as hard as the league worked to ensure precautions were taken, there's no outfightinga pandemic.

Major leagues in Europe set an example, showing that professional sports can exist in a coronavirus-ravaged world, but those situations are vastly different than those facing America this summer.

Much ofthe world is seeing a light at the end of the tunnel, but the U.S. may not have experienced the worst of the pandemic just yet.

MLS would not have anticipated that fact when this was announced, but it is very much the current reality. The U.S., as a whole, is still struggling, and those real-world problems will be a talking point throughout this tournament.

Garber insists that players are safe and that everything will go on as planned, and let's hope he's right. These are real lives and real people, after all, that have committed to this month-long quarantine away from those they love.

MLS is the first men's league out of the gate, the guinea pig, and the initial results show there are still reasons for concern. As this gets going, the hope is that those reasons die down but, until this tournament gets into a groove, Covid-19 will loom large over everything that happens in Orlando.

While the country continues to debate and discuss how to handle the coronavirus, the ongoing Black Lives Matter movementcontinues to take center stage, even as protests have died down across the country.

On Wednesday, MLS staged a protest of their own, with members of Black Players for Change, a group including over 170 players, staff and coaches across MLS, gathered on the field for a powerful display. Unlike leagues in Europe, all of MLS' players are gathered in one centralized location, paving the way for one unified demonstration.

That demonstration was powerful. Echoing the eight minutes and 46seconds that George Floyd suffered under the knee of police officer Derek Chauvin, representatives from every MLS team stood in silence with fists raised. Inter Miami and Orlando City took a knee in the center circle, forming a poignant and emotional picture.

It was a powerful statement from a league that has taken a side in what is somehow still an ongoing debate. Most importantly, though, it was a message of unity to a country still plagued by so much division and, ultimately, so much sadness.

At some point, that mirror will be put down and turned back into a television. That screen will once again be a place where you can see sporting heroes, heartwarming stories and competitive emotion. There will be a day where soccer is just soccer again and where the typical wackiness of MLS turns this tournament into must-watch TV.

But that day is nottoday. There are bigger things to discuss.