MLS games called off in the wake of Jacob Blake shooting

MLS games called off in the wake of Jacob Blake shooting 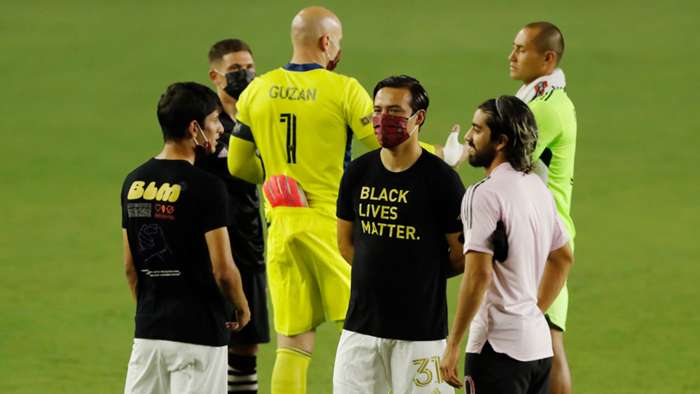 Major League Soccer has cancelled five games that were due to kick-off on Wednesday in response to the shooting of Jacob Blake.

While MLS matches had gone ahead this week, players and fanshad called on the league to take a stand and cancel games in a show of support for the black community.

Though Orlando City's match against Nashville did go ahead on Wednesday evening, MLS ultimately decided to call off the remaining five games that were set to take place.

"The entire Major League Soccer familyis deeply saddened and horrified by the senseless shooting of Jacob Blake and events in Kenosha," an MLS statement read.

"We continue to stand with the black community throughout our country - including our players and employees - and share in their pain, anger and frustration.

"The entire Major League Soccer family unequivocally condemns racism and has always stood for equality, but we need to do more to take tangible steps to impact change. We will continue to work with our players, our clubs and the broader soccer community to harness our collective power to fight for equality and social justice."

While US President Donald Trump has condemned the resulting protests,Democratic presidential candidate Joe Biden has called on the country to come together peacefully to instigate change.

"Once again, a Black man — Jacob Blake — was shot by the police. In front of his children. It makes me sick," Biden tweeted.

"Is this the country we want to be? Needless violence won’t heal us. We need to end the violence -and peacefully come together to demand justice."

In an article of the official MLS website, the league called on fans to make their voices heard.

"The fight must continue against racism, racial injustice, bigotry, hate and the use of violence by police against the Black community," the article read.

"Real change needs to happen: Theshooting of Jacob Blake and the murders duringthe protestsin Kenosha, Wisconsin are the latest incident and it has to stop.